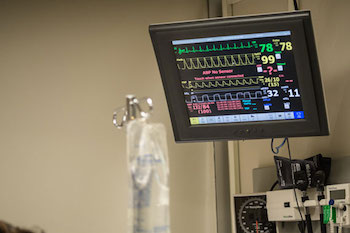 A Donegal man who received life-saving cardiac care at Altnagelvin Hospital, has revealed he has received no after-care from the HSE in Donegal.

Craig Ayres was one of 27 patients from Donegal to receive the care as part of a unique cross-border programme.

The agreement enables heart attack victims living in the northwest to access a specialist procedure at Altnagelvin Hospital in Derry.

The agreement, which is anticipated will cater for up to 60 patients from Donegal each year, started last May.

Mr Ayres said the care he received was “excellent” during his treatment in Derry in October last year.

However, he told Donegal Daily that he has been “left to his own devices” since receiving his treatment.

He revealed that he has received just one appointment to see a consultant and that will not take place until April – six months after his emergency treatment.

Mr Ayres said “I was one of the type of patients sent to Altnagelvin in Octpber 2016. The
care I received was excellent and I was told, life saving.

“Since my discharge, the care from the Donegal side has been non-existent. I have received no appointments from cardiac care in Letterkenny, and one from the consultant for the end of April 2017 – six months after the event that had me rushed to Altnagelvin.

“My point being, that one good service that saves lives is potentially ineffective without the other follow-up services in Letterkenny.

“I have been seen, treated, discharged and left to my own devices with no advice or follow-up care,” he said.

Mr Ayres said he wanted to make the point that after-care was just as important as being treated for many vulnerable patients.

“I am well able to fight my corner but I fear there are people who may be less able/vulnerable,” he added.

“It says all that is not happening for me in Letterkenny,” he said.

The cardiology deal is the first of its kind between the health authorities on both sides of the border.

The agreement covers people living within 90 minutes of Altnagelvin, ensuring they do not need to be transported longer distances to other hospitals in the State such as in Galway.

Once patients undergo the heart procedure in Derry, they are then to be transferred to Letterkenny or Sligo hospitals.

The agreement was struck by the Western Health & Social Care Trust (WHSCT) in Northern Ireland and the Saolta University Health Care Group in the Republic.

Heart-attack victim says he was “left to own devices” after treatment was last modified: January 24th, 2017 by Stephen Maguire
FacebookTweetLinkedInPrint
Tags:
AltnagelvincardiacChris Ayresdonegaltreatment