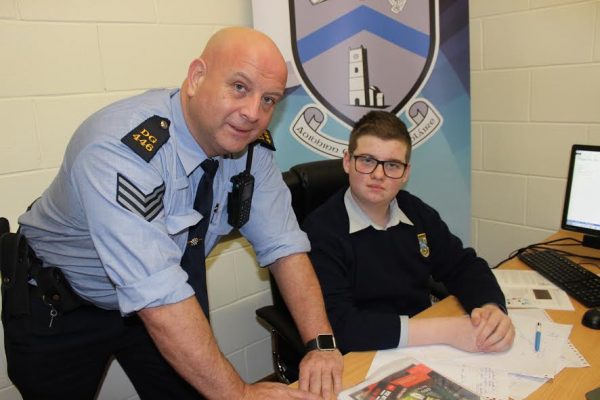 Deele College student, Dylan Nesbitt, has been invited to address the Garda Commissioner, Noirín O’Sullivan on the findings of his research into the ‘Development of young drivers on Irish roads.’

Dylan, who is from Convoy is a Transition Year student in Deele College, carried out the research as part of his entry into this year’s BT Young Scientist competition, which was held in Dublin last month.

Dylan, whose twin sister Kelly is also a student at the Raphoe school, decided to base his entry on road safety as he was intrigued by the number of deaths on our roads each year.

He began his project by compiling 200 surveys through Facebook, which were filled out by drivers in Donegal.

Dylan then took this information and processed it, putting the relevant information into pie charts and diagrams.

His main findings were that excessive speed, the lack of seat belts and driver fatigue were the three main areas responsible for the deaths of people on our roads.

He also discovered that 11 per cent of drivers in this county still do not wear seat belts and that 47.5 per cent continue to drive whilst using their mobile phones.

It was noted that 57 per cent of respondents, who had full licenses said that they did not do any driving lessons before their test. New legislation ensures that all new drivers have at least twelve lessons, but it means that there are still a large percentage of people on our roads, who have not been properly trained.

The project, which was looked on favourably by judges during the competition, also caught the eye of members of the RSA and indeed the Garda Commissioner.

In an email to the school this week, the Director of Communications for An Garda Síochána stated that, “It is heartening to see young students take such an active interest in a topic which is both current and relevant in the context of the role of An Garda Síochána in protecting and supporting communities.

“The Garda Commissioner Noirín O’Sullivan is keen to listen and learn from people of all ages and backgrounds as part the ongoing renewal of An Garda Síochána.”

Speaking following his unexpected invitation, the 16-year-old said that he was shocked but delighted by the Garda Commissioner’s letter.

“It is a great honour to go to Dublin to present the project to the Garda Commissioner. I never thought I would get such an opportunity to showcase my project. I am looking forward to meeting with her and discussing the project. I want to thank Ms Gibbons and Mr Boyle for all the support and my twin sister, Kelly, who has been a great help along the way,” he said.

School principal, Mr Joe Boyle says that Dylan’s project has really garnered the attention of those who are seeking to find a solution to the problems on our roads. He also stated that he is delighted for Dylan and that his success is testament to the hard work he has shown throughout the year.

“It was clear from the event in the RDS that the RSA and the members of the Garda Síochána were very interested in Dylan’s project, as it highlights very real deficiencies in our quest to lower the number of deaths on our roads,” Mr Boyle said.

“As a Transition Year student, Dylan has been working very hard on this project and it highlights the positive learning environment that Transition Year creates, when students are willing to put in the hard work. The recognition that Dylan has received is testament to the work that he has put in over the past few months.”

Brian O’Donnell, The Road Safety Officer with Donegal County Council, added that road safety applies to everyone who use the roads, be it as a driver, passenger, pedestrian or cyclist. The entry by Dylan and Kelly Nesbitt, Deele College, Raphoe on “A study into the development of Young Drivers on Irish roads” is a great initiative.

“It is very encouraging to see young people getting involved in Road Safety and their findings will highlight that the driving behaviour of a large number of motorists, is unacceptable.

“The road safety education approach is raising awareness among drivers who are generally focussed on driving safely. Dylan and Kelly are young people who are willing to get involved in highlighting the dangers on our roads.

“On behalf of the Donegal Road Safety Working Group I would like to congratulate them on their success and for Dylan to be invited to give a presentation on their Young Scientist entry to the Garda Commissioner, shows how serious the authorities are, in taking their project findings and views seriously.”