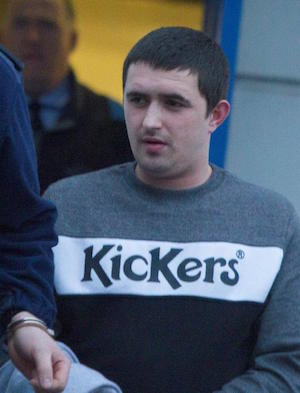 A man who almost died after being stabbed in a drunken row over a motorbike pleaded with a judge not to send his attacker to prison.

Michael Callaghan lost a huge amount of blood and spent 10 days on life support after being viciously stabbed by his nephew Dylan Kilpatrick.

The men had been drinking in a house in Donegal Town in January, 2016 at the home of Dylan’s mum Kathleen in Drumbarron.

A row ensued and Dylan Kilpatrick, now aged 22, went into the kitchen, picked up a knife and brought it back into the sitting room.

Mr Callaghan, 29, asked what the knife was for and Fitzpatrick said “we’ll see” before attacking his uncle stabbing him in the groin.

The court heard the men had been drinking cider all day.

Gardai arrived at the scene and found the injured man’s sister Kathleen applying direct pressure to her brother’s wound to stop it bleeding any more.

He spent up to 10 days on a life support machine after losing a huge amount of blood but has made a full recovery.

Mr Callaghan appeared in court to give evidence on behalf of his nephew.

Barrister for the accused man, Mr Peter Nolan, said Kilpatrick had a very difficult upbringing and spent much of his life in care because his parents abused alcohol.

Mr Nolan added “This is a classic or definitive broken home – an appalling upbringing. He didn’t get much of a chance,” he said.

The accused man’s uncle Michael Callaghan also took to the witness box and pleaded with Judge Martin Nolan not to send his nephew to jail.

He said “It was a stupid, drunken night. I lost my temper and I slapped him. We were drunk and it was an argument over a bike and I just fell out with him. I forgive him and I believe he is sorry.”

Judge Martin Nolan sentenced the accused to four years in prison but suspended the last 18 months of the sentence.