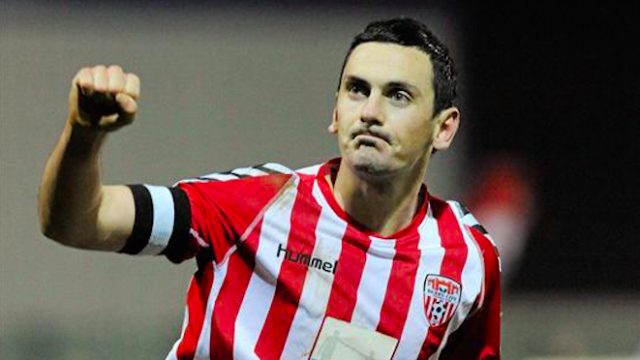 Memorial in honour of Mark Farren on Saturday in Greencastle

This Saturday, February 4, a memorial will be held in Greencastle in honour of former Derry City Football Player and Candystripes Legend Mark Farren.

Mark tragically passed away on February 3, 2016 after a battle with cancer. The Donegal born lad was aged just 33.

The striker may have left this world but his memory lives on in the hearts of Derry City fans.

He was Derry’s City’s all time record scorer, netting 114 goals in 209 appearances.

The memorial will see Derry City FC take on Greencastle FC after a prayer service at Mark’s grave in Ballybrack.

Derry City Football Club said: “We would encourage as many people to come out and pay homage to one of the greatest players to ever have put on the red and white jersey.”

Details for Saturday are as follows:

Tickets are €5 and available to purchase from

Alternatively they can be purchased on Saturday at the game.