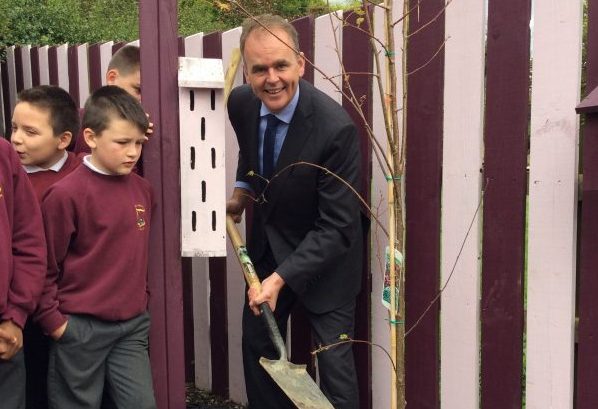 DONEGAL TD Joe McHugh says more GLAS payments to farmers have been made today with more due next week – but appealed for those applying for the grants to “check your paperwork”.

The Minister of State was speaking this evening as he confirmed around 8,550 GLAS cases currently awaiting payment.

The Green Low Carbon Agri-Environment Scheme (GLAS) provides support to farmers under the Rural Development Programme to deliver environmental benefits and public goods which will enhance Ireland’s agriculture sustainability credentials into the future.

“It provides support to Irish farmers aimed at enhancement of biodiversity, water quality and mitigation of future impacts of climate change while allowing Irish farmers to improve their agricultural productivity and practices in a sustainable manner.

“It is critical that we protect the Irish countryside for the benefit of all and GLAS provides support to Irish producers to do this while enhancing their ability to deliver sustainable food production, food production which is making a critical contribution to growth in the Irish economy.”

GLAS has been extremely successful in the range of actions undertaken. Under the commitments made as part of the first two tranches targets have been met or exceeded in some areas.

On the basis of these commitments, the benefits achieved already include the conservation of 243,000 hectares of permanent pasture, protection of 12,000 km of watercourses and preservation of 90,000 hectares of habitat and 75,000 hectares for endangered bird species. In addition, Commonage Management Plans will be prepared for over 75% of commonages nationally.

GLAS has a maximum annual payment of €5,000 under the general scheme with provision for payment up to €7,000 (known as GLAS+) where the farmer is required to give exceptional environmental commitments in a limited number of cases.

Said McHugh: “The first two tranches of the GLAS scheme resulted in almost 38,000 farmers being approved into the scheme in its first year of implementation. This represents an unprecedented level of participation in the first year of an agri-environment scheme in Ireland.

“My colleague Minister Creed recently signalled that all eligible applicants under the third tranche of GLAS will be accepted into the scheme, bringing overall participation levels to 50,000 farmers.”

The Donegal politician warned however that payment can only issue where all the required validation checks have been successfully passed.

“Approximately 8,550 cases remain outstanding. Further payment runs will be made on a weekly basis as cases are cleared.”

He said that given the range of actions in GLAS and the associated validations there are therefore a number of different reasons why payment may not have issued.

Many of these issues given their complexity require review on a case by case basis and this work is ongoing at present – the Department of Agriculture, Food and Marine is in contact with farmers on additional documentation needed to resolve queries.

As issues are resolved payments will continue to issue on an ongoing basis.

“I can assure farmers in Co Donegal that Minister Creed is very keenly aware of the need to process these payments without delay and is ensuring that all resources required both on the I.T. and administrative side are directed towards resolving the outstanding queries on these cases,” said McHugh.

Tonight the Department of Agriculture issued specific reasons for the delay in processing:

o the declaration of an incompatible parcel usage for GLAS action chosen
o changes in parcel boundaries on which a GLAS action is chosen including splitting or merging of parcels
o The applicant no longer claiming parcel on BPS 2016,
o incomplete documentation such as incorrect information on Low-Emission Slurry declaration,
o incomplete interim commonage management plans,
o incompatible data and parcel history on Department databases