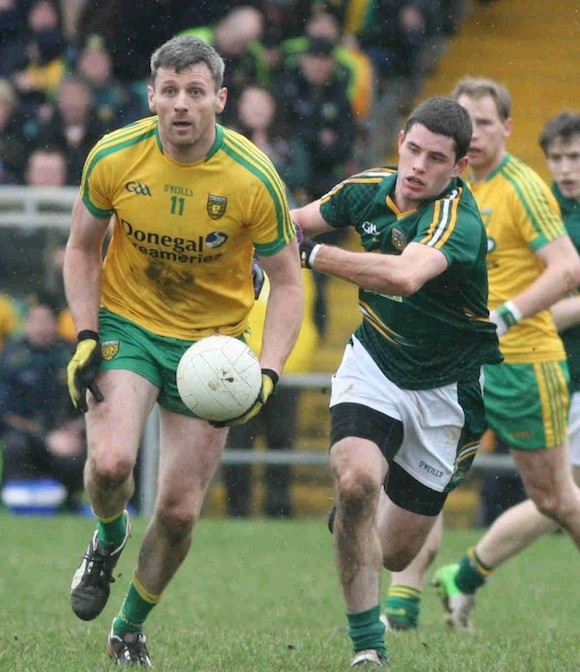 AS the dusk set in over the Drumcondra on the last Saturday in July 2011, Donegal manager Jim McGuinness summoned Christy Toye from the bench 58 minutes into the All-Ireland quarter-final against Kildare.

Alan Foley, from Donegal Sport Hub, on Christy Toye, who has retired from inter-county football

A claustrophobic encounter was deadlocked at 0-7 apiece.

In 2009, with Donegal spluttering out of Ulster against Antrim, Toye ruptured an Achilles tendon in a drab qualifier against Clare. A pin could be heard drop in Ballybofey as he was stretchered from the field.

Twenty-five months passed without Toye’s name appearing on a Donegal team sheet. He watched on in 2010 as Armagh decimated Donegal from the championship in Crossmaglen.

McGuinness, appointed that summer, was left to pick up the pieces. He wiped the slate clean, although Toye, who returned, didn’t feature in 2011’s Division Two or Donegal’s first Ulster championship win in 19 years.

Darting straight towards Hill 16 against Kildare from the sideline, Toye, who had barely broken stride, was located by Frank McGlynn in a pocket of space. With his first touch, Toye drove past Shane Connolly just 25 seconds – a second for every month out – after his introduction.

As darkness fell – adding to the theatrics of the occasion – it evolved into a matter of whose heart would beat the longest. Toye levelled the scores in injury time in the second period of extra-time; the prelude to Kevin Cassidy’s dramatic long-range winner with virtually the last kick of the game. Donegal had come through an epic, 1-12 to 0-14.

It was, in many ways, the second coming for Toye. A year later, this time on 61 minutes having replaced Leo McLoone, Donegal were four points up against Kerry in the All-Ireland quarter-final when Toye was once more thrown into the fray.

Again, it took just 25 seconds for Toye to make an impact, slotting over at the Davin Stand side as Donegal overcame Jack O’Connor’s side 1-12 to 1-10. Toye provided that valuable edge of experience against Cork and then against Mayo late in the 2-11 to 0-13 All-Ireland final victory of 2012.

Having had to pull out of the end of season team holiday to Dubai, Toye contracted trigeminal neuralgia – a rare facial nerve disorder previously known as ‘suicide disease’ – and spent five months in his bedroom at home in Creeslough.

Toye and Donegal’s tarot cards looked bleak following a 4-17 to 1-10 drubbing against James Horan’s Mayo in the 2013 All-Ireland quarter-finals. McGuinness’s future was questioned; many claimed Toye didn’t even have that much.

Nicknamed ‘Magnus’ after the former world’s strongest man – Icelandic Magnús Ver Magnússon – because of his bench-pressing abilities, a different type of strength was required from Toye.

To the surprise of many, Toye was named at centre-field for Donegal’s first outing of Division Two against Laois at O’Moore Park in February 2014. Seventy minutes later he was picking up the man of the match award after Donegal’s 2-19 to 1-9 win. If there is such a thing, then this was Toye’s third coming.

That showed signs that Donegal and Toye’s ailments were receding but it took until the Ulster final, where McGuinness’s team overcame Monaghan 0-15 to 1-9, for the all-clear.

“This time last year I wasn’t even playing and to be back here and playing and winning is very pleasing and is a humbling experience to be honest,” Toye said as he grasped the Anglo-Celt Cup.

“I always had the hunger to play again and thankfully Jim showed faith in me, kept me in the panel and allowed me to be involved.

“That was important to me and I appreciated it and what the medical team did for me too. They were all brilliant and thankfully they got me back to fitness.”

Donegal went onto defeat Armagh and then shocked Dublin to reach a second All-Ireland final in three years, with Paul Durcan’s save from Diarmuid Connolly and Toye’s introduction perceived as the turning points in that 3-14 to 0-17 All-Ireland semi-final win.

Donegal went onto lose to Kerry in the final but Toye’s place had long since been etched in history. Like many of his his contemporaries – the ones Eamon McGee calls the ‘tracksuit ravers’ – Toye’s career finished more laden than some might have ever inspected. Himself included.

No player has ever scored as many championship goals at Croke Park. As a teenager, Toye was a Croke Park goalscorer against Meath in a 2002 qualifier and Armagh in the All-Ireland semi-final loss a year later.

He slapped home an early goal against Cork in the 2006 All-Ireland quarter-final. And following that gamechanger against Kildare in 2011, there was a fifth against Galway in 2015 following a slap-down from clubmate Colm McFadden.

In all Toye, who is 33, made 163 appearances for Donegal before current manager Rory Gallagher broke the news last month that the clock had finally stopped on his and St Eunan’s Rory Kavanagh’s inter-county careers.

“They’re big losses in experience,” said Gallagher. “It’s been outrageous; the commitment they’ve given to Donegal. We have been very fortunate with all of these players.

“Christy and Rory are two of a kind. We’ve become so accustomed to seeing them in training and in games. They owe no-one anything and they’ve enjoyed their careers, especially the last few years.”

Tomorrow, against Kerry in Letterkenny, it’s something of a new dawn with new faces flooding into the senior panel from the successes at minor and under-21 level.

Some familiar faces are there no more and few gave the level of commitment as Toye between 2001 and 2016. Now the last chapter has been written.

There was never a dull moment in that particular Toye story.