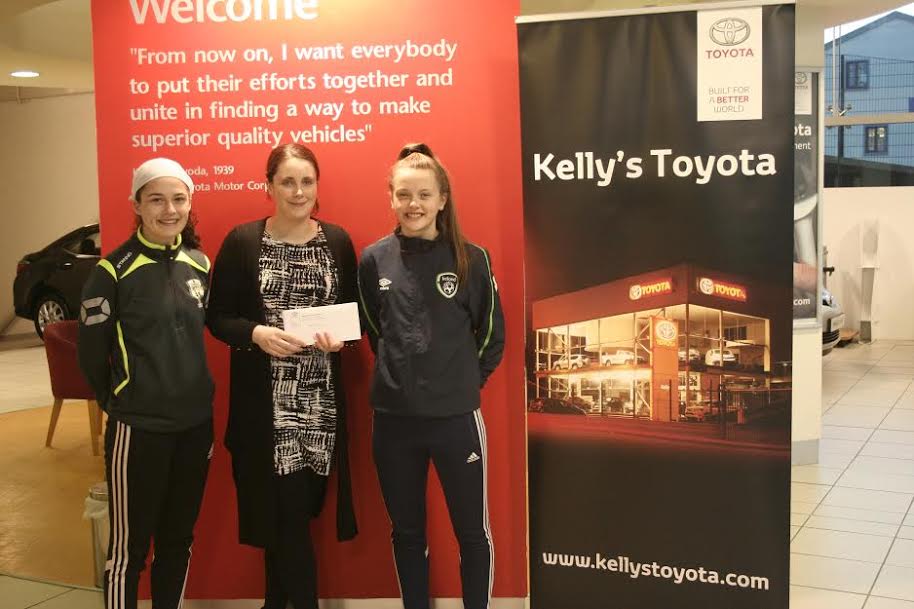 Amy Boyle-Carr and Tyler Toland, two young ladies who have been making names for themselves with Republic of Ireland underage teams in the past couple of years, were honoured by Finn Harps this week.

Boyle-Carr and Toland were honoured at an event hosted by Kelly’s Toyota in Letterkenny, who are the exclusive sponsors of the club’s schools programme.

Boyle-Carr, a student at St. Columba’s Comprehensive in Glenties, and Toland, a pupil at Deele College in Raphoe were recipients of presentations from both Finn Harps and Kelly’s Toyota having been part of the club’s Schools Programme for a number of years.

“We’re delighted to be making the presentations to Amy and Tyler who have been part of the Finn Harps Schools Programme. They have done really well and are developing into two fine footballers. To see both of them being capped at underage level for the Republic of Ireland over the past couple of years is fantastic for girls soccer in Donegal” said coordinator John Campbell.

Boyle-Carr recently won the Donegal Sports Star ‘Best Secondary School Girl’ Award while, Toland was a nominee in that category.

“Amy and Tyler are excellent ambassadors so it’s great to have them helping us out with coaching on the Finn Harps Schools Programme. The Club was delighted to make presentations to them last night of match tickets for games at Finn Park this season and our main sponsors Kelly’s Toyota also made presentations to them.

“Hopefully now Amy and Tyler can go on to achieve further success at schools and international level,” Mr Campbell said.