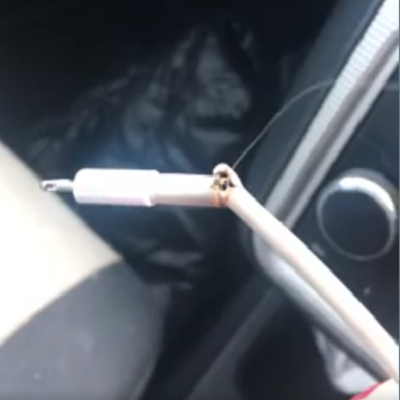 Donegal mother Denise O’Donnell had a lucky escape this week when her phone charger suddenly began to let out smoke in her car.

The Ramelton woman had a terrible fright on Wednesday morning when charging her iPhone 6 using an in-car USB attachment and it overheated and went up in smoke.

“It’s scary how simply it could happen. I thought it was going to burst into flames” Denise told Donegal Woman. It was a stroke of luck that she did not have the wire on in her home with her family when it overheated. She was just about to get out of her car that morning when she was alerted to the rising smoke.

“I was on the way to Letterkenny to go to the Post Office. I had only been driving two minutes up the road when I stopped to get out of the car and saw the smoke.

“There was no smell but I could see the smoke starting very quickly. It was getting thicker so I pulled the wire out right away. I took the video then as proof of what happened.

“I shared the video all my with friends to alert them to the dangers. You see and hear about these things all the time but you don’t take any heed of it until it happens to you,” Denise said.

Denise said that she is unsure about the brand of the wire because she owns a mixture of chargers from different stores. However, she is sure the fault was with the wire and not her car charger. She believes the damage was internal.

“There was no visible damage on the outside before I used it. It was not bent like in the video. You can see the plastic melting from the heat.

“I thought it might have been a fault with the car charger, but I immediately went out to buy a genuine Apple wire and it works fine,” she said.

Denise has four children and said she dreads to think what might have happened if she had been charging her phone overnight using this wire.

“I have two teenage daughters who are always charging their iPads and iPhones in the house. They have their own chargers they keep in their rooms but I am warning them now not to leave them on overnight,” she said.

It was almost fate that she hadn’t charged her phone the night before, she said. “I charge my phone in my bedroom every night but something made me not do it that night.”

Denise is planning to research more advice on how chargers should be supervised and is warning her family and friends to be more careful. “I know now that you can’t rely on electrical devices. I still don’t know if this was a genuine Apple wire but I will definitely not be buying the cheaper versions anymore,” Denise said.