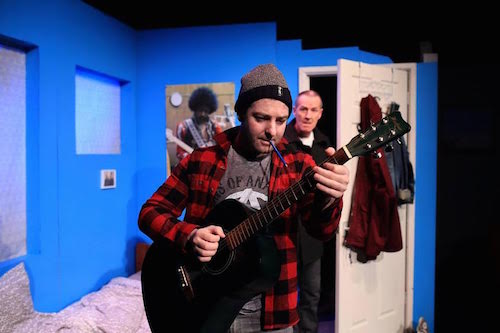 Powerful play on suicide to feature at Balor Theatre

A powerful drama which explores the effect of suicide on the family will be staged at the Balor Arts Centre in Ballybofey this week as part of an all-Ireland tour with a Co Donegal actor in the lead role.

Sole Purpose Productions is taking ‘Blinkered’ written by Patricia Byrne and directed by Shauna Kelpie, to a total of eight venues including the Balor on Wednesday and Thursday, February 15th & 16th and An Grianan Theatre, Letterkenny on March 8th & 9th thanks to funding from the Arts Council of Ireland’s North South Touring Fund and the ESB Energy for Generations Fund.

‘Blinkered’, which made a huge impact on audiences when it toured to schools in the North West last year, will be staged in Derry, Donegal, Belfast, Strabane, Dublin, Sligo and Drogheda until March 30th.

Sole Purpose, which also celebrates its 20th anniversary this year, opened the tour last Thursday at The Playhouse in Derry and received standing ovations at both matinee and evening performances.

Artistic Director Patricia Byrne, who consulted widely with mental health and suicide prevention professionals, explained: “’Blinkered’ is a play which explores the issue of mental health, suicide, and its impact on the family. Sole Purpose wanted to raise awareness of this challenging subject and we worked closely with key people including Siobhan O’Neill, Professor of Mental Health Services at Ulster University School of Psychology; Conor McCafferty, Manager at Zest NI; Bridie Sheridan, Manager at Youthlife; and AWARE NI.”

The play follows the story of Ryan who has his music, friends, and a family that care about him but there is a “darkness and a heaviness” that will not go away.

Recalling the impact on audiences when the drama was first staged in Derry last year, Patricia said: “It was a highly emotive and hard hitting production but one which dealt with a subject which we in this city are only too familiar with.”

Conor Malone, Manager at the Balor where ‘Blinkered’ will be staged next Wednesday and Thursday, February 15th & 16th at 11am and 8pm, said: “Sole Purpose Productions has an excellent track record of producing some quality drama. We are very much looking forward to hosting them in Ballybofey. In today’s society the themes of the play are very relevant and very important, especially to young audiences.”

Each tour performance is followed by an interactive workshop offering the audience an opportunity to explore issues raised in the play.

Encouraging people to go and see ‘Blinkered’ which is suitable for age 16+, Lizzie Devlin, Arts Development Officer, Arts Council of Northern Ireland, said: “The production mirrors the Arts Council’s Youth Arts Strategy which advocates using arts-based projects and creative interventions to promote positive mental health and well-being among young people. The Arts Council of Northern Ireland are delighted to support ‘Blinkered’ through our North/South Touring Scheme alongside our partners An Chomhairle Ealaion and congratulate everyone involved in bringing this important production to new audiences across the region.”

Samaritans will be in attendance at each performance with information about their services. The numbers to call if needed are 116 123 (UK) 116 123 (ROI) or email jo@samaritans.org

For more information about ‘Blinkered’ including a YouTube video extract and web links to book tickets for any of the theatre venues, visit www.solepurpose.org or www.balorartscentre.com