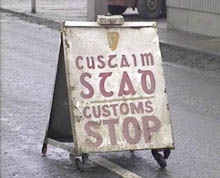 The Minister for Finance has confirmed that Revenue Commissioners are identifying location points along the border for the return of full customs checkpoints as it prepares for Britain’s withdrawal from the European Union.

The disclosure was made by the Minister today in response to questions from Deputy Pearse Doherty during a sitting of the Oireachtas Finance Committee.

It has renewed fears of a return to a hard border following Brexit.

Deputy Doherty said “The confirmation which I’ve received from the Minister today that Revenue Commissioners are preparing for the return of a hard border, and are now actively identifying sites along the border to locate customs checkpoints post Brexit is extremely worrying.

“If anyone was still in any doubt that the establishment of a hard border between the north and south was not a distinct possibility then today’s admission from the Government will have dispelled those doubts.

“Now the prospect of full border checkpoints being established at various locations in counties Louth, Monaghan, Cavan, Leitrim, and in my own county of Donegal, seems to be very much on the cards.

“This is a major cause for concern for the island of Ireland as a whole, but particularly for counties along the border where communities there have such close social and economic links.

“The re-introduction of full customs checkpoints would cause considerable economic upheaval, and poses a very real threat to our economy and to employment on this island – both north and south.

“Prior to the EU Referendum vote last June, Sinn Féin called on voters in the north to vote to remain within the EU because our party fully understood the huge consequences which leaving the European Union would have on our entire island and its people.

“However, despite those well founded concerns, certain politicians and political factions on both sides of the border used the opportunity of the referendum to actively call on voters to vote to Leave – in the wake of the Minister’s announcement today those very same politicians must now be held to account for their reckless actions.

“Sinn Féin continues to call for the vote of the citizens of the north to be respected, and for a special designated status to be granted to the six counties following Britain’s withdrawal.

“The Government must advance this case for a special designation status for the north within the EU and it must work to garner the support of the twenty six EU member states in order to guarantee the best possible deal for this island and its people post Brexit.”