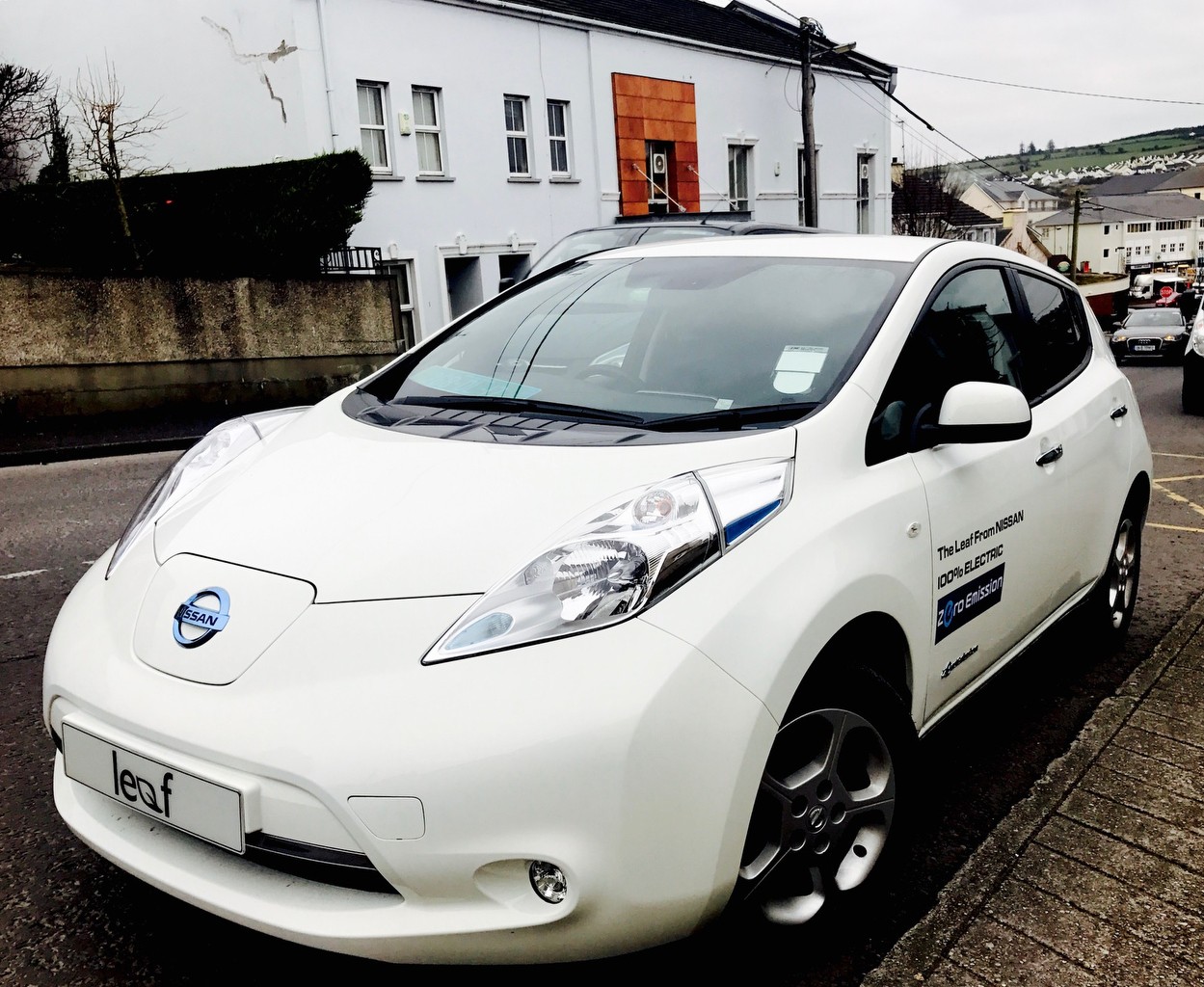 At the weekend I had the pleasure of driving the Leaf, an all electric car from Nissan.

The last time I tested an electric vehicle I wasn’t that impressed with it because of its very small range of around 60 miles. I came away thinking it would be grand in a city where the journey distance were short and access to recharging outlets would be plentiful.

With Nissan and their “all electric car” they have addressed the range issue and in the right conditions this car will achieve over twice the range of earlier electric cars with its state of the art powerful batteries.

The sales executive at Inishowen motors Joe, a man from Meath gave me a very well informed pre-test drive talk on the Leaf. Me being a typical male, I wasn’t really listening to him. Thinking I knew all about these cars, sure it just would be like any other automatic car. Wrong.

As I headed off in the Nissan, I was trying to think on what kind of people would buy an electric car? Are they really interested in the environment? Or do they think they will save loads of money on the ever increasing price of fuel? 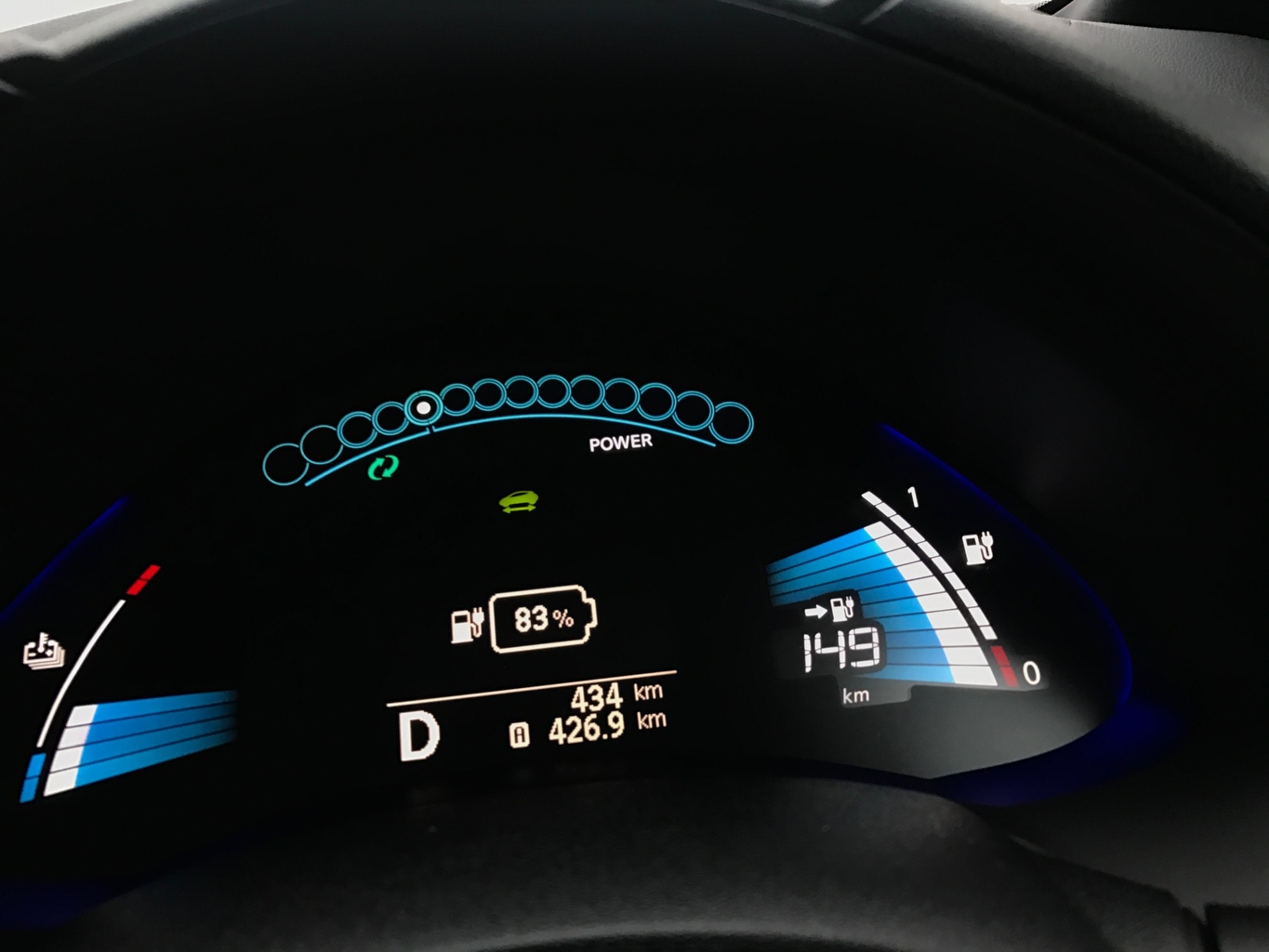 83% left of a full tank on the Nissan Leaf at the end of our Test Drive this week in Co. Donegal. Photo Brian McDaid

My leaf was 94% full to the brim. There wasn’t a sound of the electric motor in the car, all I could hear was the sound of the fan on the air conditioner so I switched it off as well just to see what’s it like to travel in complete silence.

One would think that the locals welcomed the silence when the big generators were turned off. It was the complete opposite and were unable to sleep at night because it was too quiet without the noise of the generator rumbling through the night.

My journey down through the Bullock Park reminds me of flying, with every bump in the road feeling like a small pocket of turbulence in the air.

I thought to look at the two headlight units sticking up on the front of the car that Nissan didn’t make a good job of them in the wind tunnel. I was to learn that their shape mimics the two wing mirrors further down the cars body, so the airflow is shaped like them before it hits them so to keep the aerodynamics at its most efficient.

Even underneath the Nissan Leaf because it doesn’t have an exhaust system the floor panels of the car are also aerodynamic friendly.

It’s not only the feeling of silence that makes you think you’re gliding above the ground, also the way you start to reconsider your journeys make you very similar to that of a captain of your flight.

Onboard the Nissan Leaf the Sat Nav has relative information of your surrounding area of things you need to know. 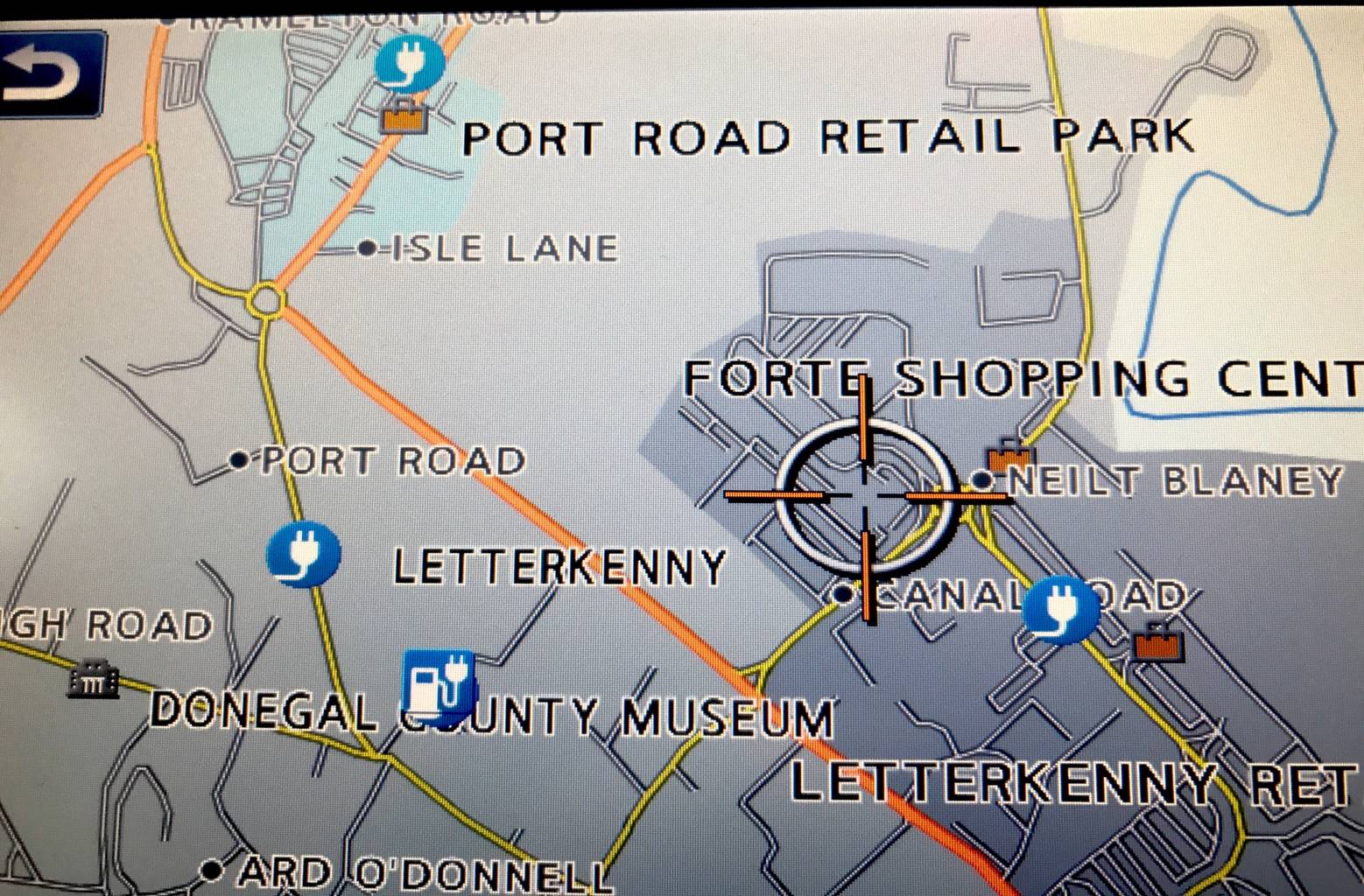 The four public power outlets in Letterkeny on the sat nav of our Nissan Leaf which also indicate if the points are in use by another customer or not. Photo Brian McDaid

Heading into Letterkenny, the map on the dash shows you not only where the public refueling power supplies are located but also will show you if someone is using them so you can plan which one to go to. 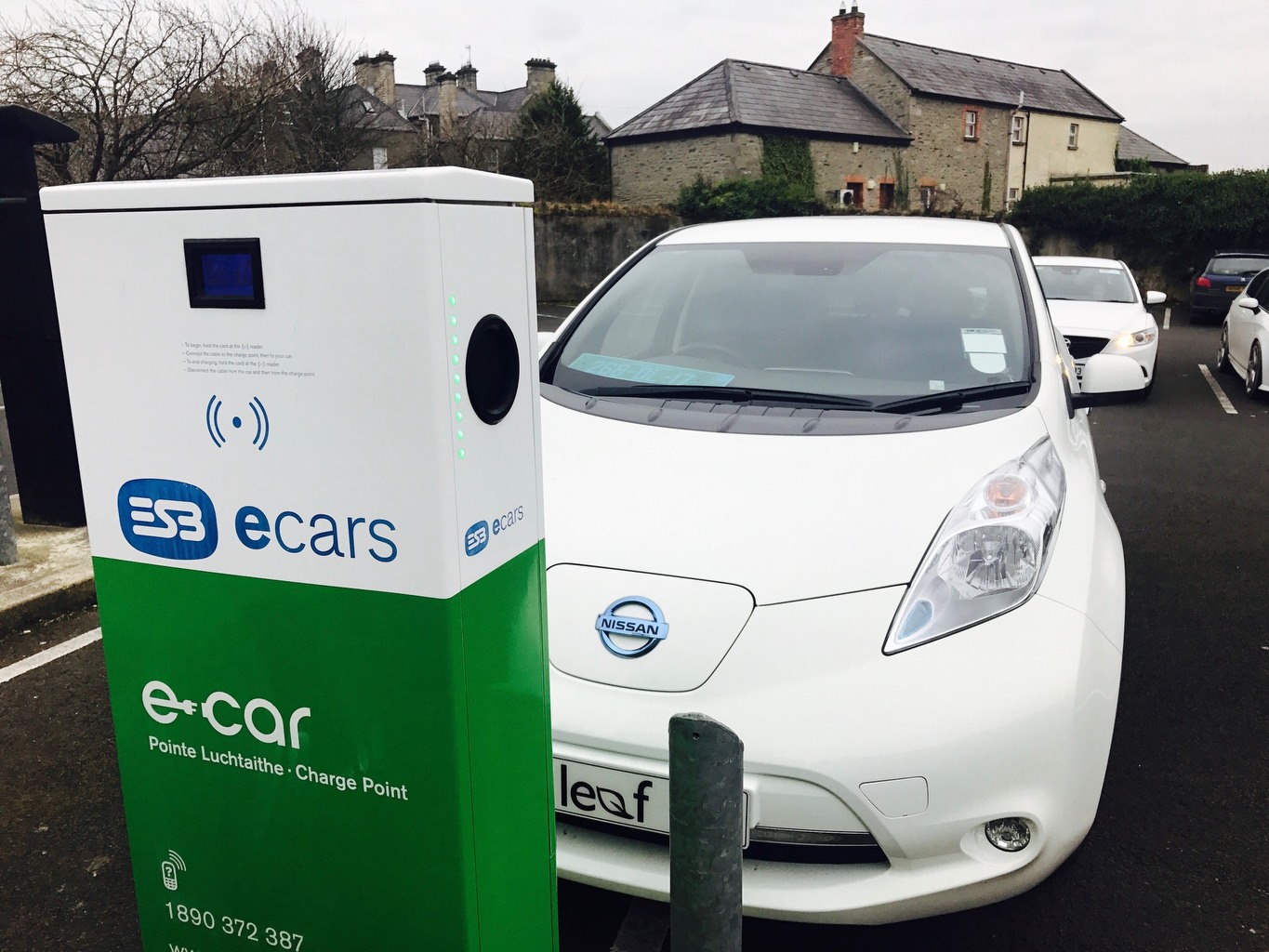 Our Nissan Leaf pictured at one of the E car Charge Points in Letterkenny which is supplied by the ESB. Photo Brian Mc Daid

Try as I might on the day that I had the car out I couldn’t flatten the batteries quick enough to take it to one of the power points and fill it up. I used only 14% of the battery in three hours running around Letterkenny in the heaviest of Friday evening traffic jams.

I suppose what’s confusing about an electric car compared to its petrol or diesel cousins is that the bigger the traffic jam the more it’s benefit you will have in the leaf, because it’s not sitting idling burning up fuel when the traffic is stopped, so it’s ideal for Letterkenny in its present state.

Home Comforts
Once you realise that the Nissan Leaf is far better than you ever imagined it to be as far as the range of the battery which will be exactly what it says on the tin, not like some petrol or diesel cars that I have drove which will give you a very high end of range fuel tank reading one minute the to turn to a flashing orange petrol light the next minute.

The Leaf is looking at the bigger picture all the time.

In the Leaf this is all done electrically. If you add to that the comfort of heated seats and heated steering wheel on the Leaf that we drove, the sheer comfort in this car on a frozen day in February was not a worry. On a warm sunny day that car also can be cooled from the comfort of the phone, through the car climate control system, 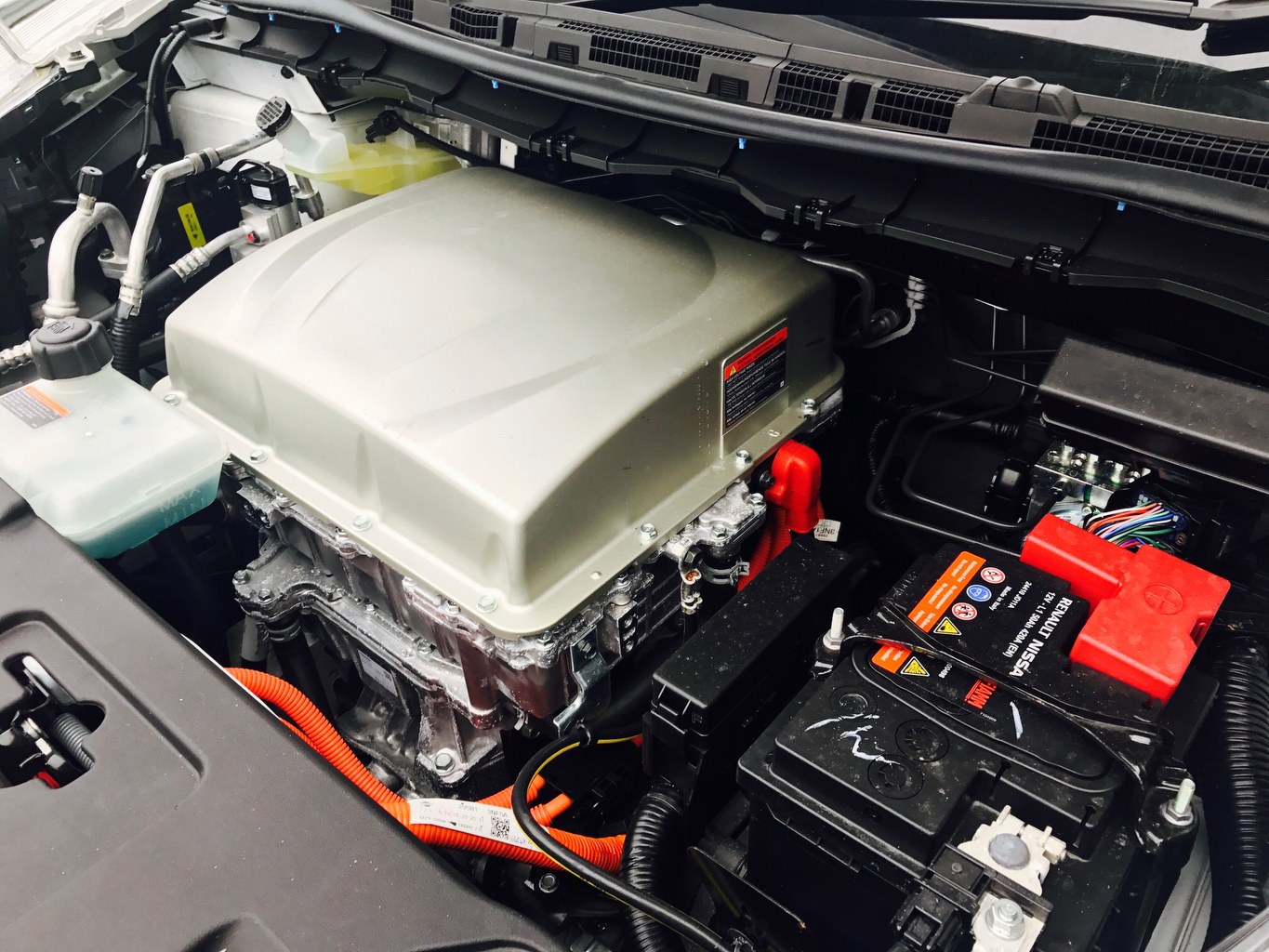 The Electric Motor on the Nissan Leaf which is both powerful and efficient to suit the needs of every driver. Photo Brian McDaid

Nissan LEAF is the first mass-produced vehicle in the world to employ a heat-pump cabin heater.

Petrol vehicles re-use engine exhaust heat to provide the warm air for the functions of the heater. An Electric Vehicle however, does not have this heat source to recycle and so uses its general power for cabin heating.

Don’t ask me how this works bacause i haven’t a clue, but it does and work so well on the Nissan Leaf to heat the cabin of the car in no time

Conventional air-conditioning systems used an electrical heater, but since the use of the heater directly relates to power consumption, actual driving range was significantly reduced.

A heat-pump system, meanwhile, heats the cabin using the temperature difference between a refrigerant and the outside air, obtaining a heating effect other than consuming electricity, and making it possible to heat the car cabin with less power than conventionally.

The Nissan Leaf has a couple of different driving modes all of which will cater for the different types of driver of this electric car. The powerful electric motor can match the best of the rest away from the traffic lights because the power is there right away, but full power on tap will use your supply up quicker.

The car also has a ECO mode which will restrict the power and give your power supply more miles on the road. The car also can be set in a drive mode that can extract a recharge when the car is going down a hill , all in all Nissan have produced a great car to move away from burning fuel to get from A to B using the cleaner electricity of the future in the process.