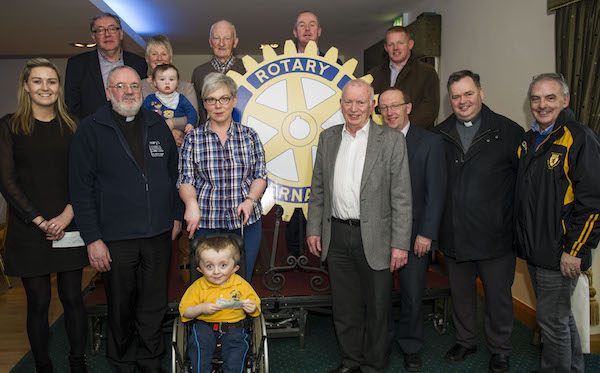 Rotary Club had over magnificent cheque of almost €15,000 to charities

The Rotary Club of Letterkenny recently handed over the magnificent sum of €14,720 to local and international charities.

This fantastic amount was raised at various Rotary led events and lunch meetings during the past few months.

These included the now infamous Winter Willie Warmer last November, which was a 5k fun run or walk and also the tremendous Christmas Tree of Remembrance which was positioned down at the Letterkenny Shopping Centre aisle, for a few weeks before Christmas, where many people dedicated yellow ribbons in honour of people they wanted to remember at that special time of year.

The Rotary Club also organised an Open Appeal via local media in support of the Haiti Disaster Appeal and Father Kelly, of St. Eunan’s Cathedral also extended that appeal to his parishioners.

That money was subsequently passed over to the Rotary Club for onward transmission direct to the heart of the Haiti disaster area, as he is well aware of the great work that Rotarians accomplish at the coal face of disasters and dire conditions like that.

The attached photo shows some recipients as well as Rotarians at the awarding ceremony.

The following sums were gratefully accredited €3,000 Donegal Down Syndrome Association; €1,000 Donegal Bumbleance Fund, €1,000 Friends of Letterkenny Hospital; €500 to the Building fund at Church of the Irish Martyrs; €500 to the Rotary Crumlin Hospital Childrens Appeal and €3,720 to the Society of St. Vincent de Paul, which was in fact given to them in time for the Christmas Appeal, and €5,000 had also been forwarded to the Haiti Appeal prior to Christmas.

It is widely known that Rotary Clubs are at the forefront of humanitarian service, supporting thousands of projects worldwide to provide clean water, fight diseases, promote peace, provide basic education, as well as the historic project dedicated to eradicating polio worldwide, and of course all the time working within their own communities helping in local organisations and voluntary sectors.

The Letterkenny Rotary Club is indeed indebted to everyone in Donegal for their continued support of their Fundraising activities and for their untiring generosity.