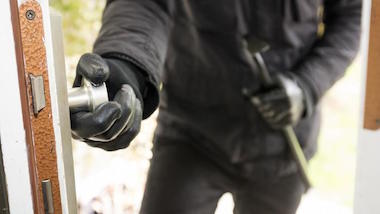 Another attempted break-in has residents on high alert

People living along the border between Donegal and Derry have been put on high alert after yet another attempted break-in at Manorcunningham.

Gardai believe an attempt was made to enter a home at Mondooey, off the Letterkenny to Lifford road, earlier this evening.

Sources believe the same gang could be behind similar raids in recent days.

Donegal Daily has learned that a gang could be using the cover of the border to come into Donegal, carry out burglaries, and then skip back across into Northern Ireland.

On Saturday night last, two firearms were stolen during a burglary in the Manor area.

Locals put out a community alert last night and a large-scale search took place for a vehicle, possibly an Isuzu Trooper jeep.

It was reported that the jeep was chased out of the townland before Gardai reached the scene and get a checkpoint set up.

The jeep was described as being white/cream in colour with the back windows painted the same tone.

Gardai are concerned about the stolen weapons being in the wrong hands and have warned firearms owners in rural areas to ensure all weapons are stored securely.

A Garda spokesman told us “People should remain vigilant and report all suspicious activity to gardai.”

Anybody who has sightings of this vehicle or any suspicious vehicles is asked to contact Letterkenny Garda station on 0749167100 or the Garda Confidential Line on 1 800 666 111.