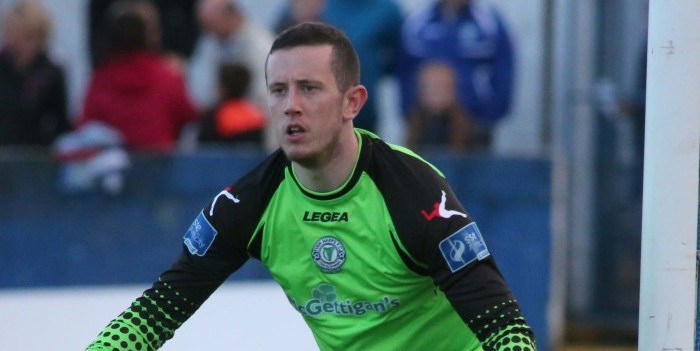 A madcap game by the Seaside saw Finn Harps fall to defeat to Bray Wanderers on a night that had a little bit of everything.

Bray’s fine start to the campaign continued with Gary McCabe’s controversial brace and goals by Anto Flood, Aaron Greene and Dylan Connolly giving them a win – but it was a night that had so many talking points.

A brace from Ciaran O’Connor and a brilliant header from Ethan Boyle gave Harps hope, but they left an exhilarating night empty handed.

While Ollie Horgan’s men might reflect on some generous defending at times, a considerable portion of their ire will be directed at the referee, Anthony Buttimer.

Harps strongly contested the awarding of the free kick and the penalty that led to Bray’s opening two goals, but it was Bray’s fourth that perhaps left the sourest taste.

Ciaran O’Connor’s second goal of the night had brought Harps back into a tie that was neatly poised at 3-2 when Ciaran Gallagher, the Harps goalkeeper, shipped a heavy blow in a challenge with Connolly.

With Gallagher strewn on the turf, McCabe finished from distance and the goal allowed stand.

Gallagher was clearly in distress and was replaced by Harry Doherty, who was given his debut.

Doherty did well to save from Connolly when he bore down in the 68th minute, but Connolly finished from the rebound.

Harps were on the back foot after 20 minutes as Anto Flood and Gary McCabe, from a disputed penalty, had Bray two up and it was an ominous feel at the break after Aaron Greene headed home late in the half for a 3-1 lead.

Harps hadn’t exactly been obliging opponents and looked well in the mix when O’Connor fired home from close range to make it 2-1 in the 33rd minute.

That being said, Bray’s first was one that was avoidable on several levels.

While the ‘foul’ by Boyle on Connolly was soft in the extreme, Harps ought to have kept their sheet clean.

The free kick by McCabe didn’t appear taxing, but Gallagher could only palm down and, in the ensuing scramble, Flood steered high into the Harps net.

It got worse for Harps when a cross by Greene was deemed to have struck the hand of Michael Funston and McCabe stepped up to tuck home a 20th minute penalty.

Harps had been denied a penalty of their own after only five minutes.

Jonny Bonner’s wonderful piece of ball work played in Sean Houston, who went to ground, but Buttimer waved play on.

Bonner was the architect of Harps’ first goal of 2017.

A teasing, floating free-kick hit the woodwork and O’Connor was sharpest to apply the finish and bring Harps back into the contest.

The on-loan Dundalk striker had drawn an earlier save from Peter Cherrie while Houston shot wide from a cross by O’Connor as Harps probed with good intent.

Just three minutes into the second half, O’Connor did well to trap a tidy ball into the box by Ciaran Coll. O’Connor held it up and worked a chance for himself, his shot having a little too much sting for Cherrie to keep out.

McCabe and Connolly put the tie beyond Harps, though Boyle’s header – a magnificent effort flicked down into the bottom corner – from a delicious Paddy McCourt corner, did raised faint hopes in the away section.

Replacement netminder Doherty, signed from Cockhill Celtic in the winter, thwarted Connolly and twice denied McCabe while Cantwell cleared off the line from Flood as Bray tried to twist the knife.

In added time, Flood’s attempted chip beat Doherty, but was a fraction over and, finally, we could draw breathe.