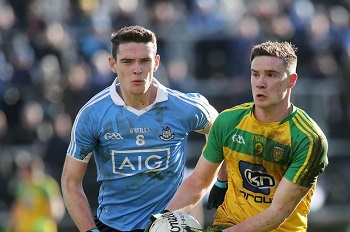 Donegal’s so-called ‘transition’ is moving along pretty nicely – and an eight-point win over Cavan tonight means Rory Gallagher’s new-look side is all but safe in Division 1 for next year.

Eoin McHugh’s goal early in the second half helped set Donegal up for what was, eventually, a comfortable win.

Donegal have lost nine players from their 2016 squad and a difficult spring had been anticipated, given the turnover in personnel, but this proved another useful and encouraging night.

The tunes of Christy Murray’s bagpipes in the stand signalled a big win for Donegal’s emerging crop at a usually-testing venue for visitors.

As they roll away from Cavan town in the dark of night, they will reflect on another fine hour, on which Ciaran Thompson (above) booted five points, Jamie Brennan came off the bench to kick three.

Cavan will look back on an evening when their discipline left them – and Mattie McGleenan finished with 13 men on the park.

Cavan captain and midfielder Killian Clarke was red carded in the 32nd minute for a wild and reckless lunge on Eoghan Ban Gallagher, which sparked the fuse.

Late in the game, substitute Cian Mackey was black carded with Cavan having used their full compliment of replacements.

Clarke’s dismissal came at a time when Cavan were inching their way back into a game that could – and maybe should – have been already gone from their reach.

But Donegal made no mistake in the opening moments of the second half.

Hugh McFadden swung over from the stand side in a signal of their intent before they bagged the oak in the 38th minute.

Murphy collected a loose kick-out by Galligan and, after transferring between Caolan Ward, Darach O’Connor and Jason McGee, the ball was worked to Eoin McHugh, who slotted home.

McFadden and McHugh hadn’t been named to start, but came in to take the place of Patrick McBrearty and Paul Brennan on the side posted by Rory Gallagher during the week – and it was they who hit big scores after the changeover to give Donegal a cushion.

In spite of their numeric advantage, Donegal couldn’t shake off Cavan from their coat tails for a time in the second half.

Mackey spurned a glorious chance to bring the home side to within three points when he struck what seemed an easy free against a post.

Mackey, in the 53rd minute, set Niall Clerkin up for a goal chance, but the target was narrowed and he shot into the side netting.

At that stage, there was still a danger that Donegal could be caught, but Thompson – who had a magnificent game – scored twice either end of a stylish point by substitute Jamie Brennan.

Thompson found his range again from a difficult angle to open up an eight-point margin and there was no doubt about the victor.

It was fitting that Mark McHugh came off the bench to kick Donegal’s final point. It was surely an emotional night for Mark and Ryan McHugh, after the sudden death of their maternal grandmother, Ann O’Donnell – a regular at Donegal games near and far – yesterday.

Donegal had raced into a five-point lead by the 13th minute, but scored just once more in an opening stanza in which they spurned another eight scoring chances, firing six wide and dropping two short.

Cavan, largely thanks to Seanie Johnston’s free taking, were within two points, 0-6 to 0-4, at the break, but they were fortunate that Dara McVeety didn’t suffer a fate similar to Clarke.

McVeety, already booked, was given a stern lecture by Conor Lane, the referee, in added time at the end of the half, when the referee would’ve been well within his rights to flash another yellow.

Donegal, following last Sunday’s dramatic draw with Dublin in Ballybofey, knew that a win here would go a long way to securing their top flight status – and they began with serious intent.

Michael Murphy drilled over a pair of routine frees to start the ball rolling before Thompson landed a massive score from distance with Cavan all at sea.

Eoin McHugh delightfully curled over before Murphy turned provider for Frank McGlynn, who neatly applied the finish, and Donegal were 0-5 to no score in front.

It was just inside the 23rd minute before Johnston – after winning a free off Paddy McGrath – raised Cavan’s first white flag of the evening at a stage when the home support were in a desperate search for something to cheer.

Cavan just weren’t at the races and a tame attempt by substitute Rory Dunne, popped into the arms of Mark Anthony McGinley in the 24th minute summed up their fruitless endeavours.

Cavan remained in contention until Donegal began to pull away in the last 17 minutes, with the Tir Chonaill men adding eight points in that period to cap their best hour yet of the new era.