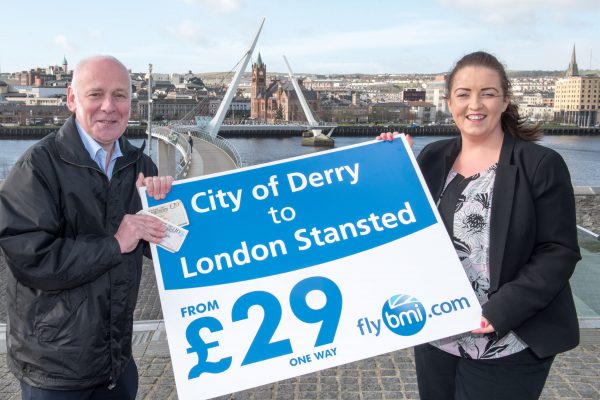 bmi regional have just launched their new service from City of Derry Airport, (CoDA), to London Stansted, with flights on sale at an introductory price of only £29 one way.

The double daily service to London Stansted, (exception Saturday when there is one service) is expected to prove very popular with business and leisure travellers throughout the North West as it offers customers a convenient, all-inclusive service where 23kg bags fly for free and passengers can enjoy complimentary drinks and snacks on board. Tickets go on sale today, with the service commencing on 02 May 2017.

Commercial and Marketing Manager, Charlene Shongo outlined that “To celebrate the launch of the new City of Derry Airport to London Stansted service, bmi regional are releasing seats for sale from just £29 one way for travel between 02 May 2017 and 31 August 2017. The new route is on sale today, 09 March 2017, with fares starting from £29 one way.

“All bmi regional fares include 23kg of hold luggage, allocated seating and complimentary in-flight drinks and snacks. Since these amazing all-inclusive fares will be snapped up very quickly, and must be booked by 17th March, customers should visit www.bmiregional.com and book their flight to avoid missing out”.

Mr Roy Devine, Chairman of CoDA Operations Ltd stated: “We are absolutely delighted with the appointment of bmi regional to operate a double daily service from City of Derry Airport to London Stansted – it is a very welcome boost for both the Airport and the wider North West region. A direct air link with a London airport is imperative for this region – and its business community”.

Jochen Schnadt, Chief Commercial Officer of bmi regional, commented, “The North West region of Ireland is undergoing a sustained period of economic growth, and has received significant investment in new jobs and growth projects over the past 12 months.

“It is important for businesses that the region is well connected to the UK capital and bmi regional is proud to be bringing its quality, premium product to this route.

“Whereas previously business travelers between Derry and London have had to stay overnight in the city, with our new double daily flights they will now be able to commute there and back in a day, saving both money and time, and hopefully resulting in continued economic growth for the Derry region.”

Regional & City Airport’s Contracts Director, and representative of the management company at the Airport, Mr Clive Coleman, outlined that the new London service will safeguard 124 jobs at the airport and deliver approximately 66,000 customers per annum to CoDA. Clive emphasised that the new double daily service will enable travellers within the local area to depart CoDA early morning and return the same evening as well as acting as a catalyst for in-bound tourism to the region.

Mr Coleman concluded by stating that CoDA has become the airport of choice for the North West of Ireland, offering both convenience and excellent customer service and that he would encourage all travellers within the local catchment to think about flight options from their local airport when making future travel arrangements, asking air passengers to “Think Local and Choose CoDA” whenever they can.

“We have fantastic facilities on our doorstep and it is essential that everyone takes advantage of their local airport for their travel plans when possible”.

Tourism Ireland warmly welcomes today’s announcement by bmi regional of its new flight from London Stansted to City of Derry Airport. The flight, which commences on 2 May, will certainly help boost tourism from the all-important GB market, offering more choice to prospective visitors travelling from London.

Niall Gibbons, CEO of Tourism Ireland, said: “Today’s announcement is good news for tourism to Northern Ireland, and the North West in particular, for 2017. We look forward to working with BMI Regional, to maximise the promotion of this new service from London.

“As an island, the importance of convenient, direct, non-stop flights cannot be overstated – they are absolutely critical to achieving growth in inbound tourism. Tourism Ireland is committed to working with BMI Regional and all our airline partners, through co-operative marketing, to drive demand for flights to Northern Ireland.”