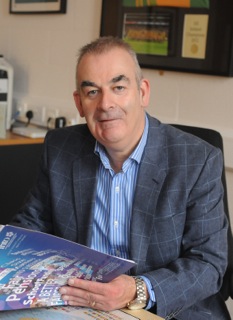 A well-known West Donegal is bidding to become the President of the Irish National Teachers Organisation.

Current INTO Vice-President John Boyle, who has been teaching in Dublin for 30 years, is the front-runner to be elected to the position of INTO President.

Postal ballots arrive in schools this week. The INTO has 44,000 members in approximately 4,000 schools throughout the 32 counties.

John, from Mulladuff, polled very well in the branch nomination process in January winning 135 branch nominations from the 170 branch AGM’s held. Branches in every county supported him strongly.

However, the real election takes place in the coming weeks. Ballots were posted from INTO Head office on Monday and must be returned there by Wednesday April 12th. The count takes place the following day- Holy Thursday.

John has worked tirelessly within INTO throughout his teaching career. He was elected to serve 3000 teachers in 300 schools in South Dublin and County Wicklow for 12 successive years since 2004 and was the unanimous choice for Vice-Presidency last Easter. However as the union’s rules allow any member to run for Presidency he will depend on the postal ballot for success this time around.

John has always been a huge support to Donegal teachers and to Donegal schools. He has always been at the end of the phone to assist teachers with their queries and has stood in for the Donegal/Leitrim Representatives on the Central Executive Committee, any time they were unavailable.

As late as last week he helped a number of principal teachers in the county who were grappling with the staffing appeals process. He is confident that all of these schools will retain existing teachers or in the case of the one teacher schools that they will gain another teacher.

John will bring huge experience to the position of INTO Presidency. He is known to be an expert negotiator with an encyclopaedic knowledge of industrial relations machinery. He has a passion for teaching and for the education system.

Since he became Vice-President a year ago this week INTO has delivered:

• 1200 Promotional Posts of Responsibility from next September 1st

• Earlier pay restoration – every INTO member will receive a salary uplift of 1000 euro next week.

John has also received huge support in Northern Ireland winning the nomination of the vast majority of branches there. He recently attended the Colmcille’s Winter School in Gartan, where he called for increased resources for Gaeltacht schools and for a fair pay award for teachers in Northern Ireland. He is very concerned about the effects of Brexit on the economy and on the education system in the North West.

INTO District Secretary Paula Muldoon and branch officers across the county have encouraged all member to vote for John and to return their votes together from each school by the weekend.

If John is elected he will prioritise: