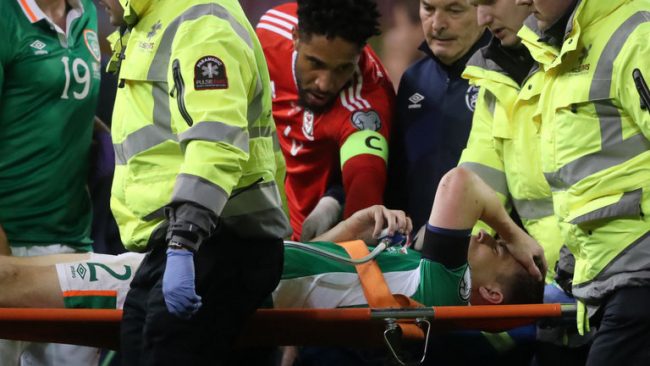 Seamus Coleman will undergo surgery today at a Dublin hospital after suffering a horrific leg break.

The Killybegs man was stretchered off from the Aviva Stadium last night after Aston Villa left back Neil Taylor was shown a straight red.

Coleman, 28, had to be given gas and air to ease the pain after the horror tackle.

Team-mate Shane Long rushed to Coleman’s side to give him support and put his face close to his pal’s in order to shield his eyes from the compound fracture.

He was rushed straight to hospital where he was given heavy doses of pain relief.

The popular right back will be taken into surgery later this morning where surgeons will delicately rebuild his leg.

But Seamus faces at least six months on the sidelines as the horrific fracture heals and will undergo intensive physiotherapy to help him rebuild his legs muscles.

Taylor soon acknowledged the error of his ways to Ireland assistant boss Roy Keane as he walked off.

His club Everton tweeted after the game: “The support of all Evertonians is with Seamus after he was stretchered off at the Aviva during tonight’s game against @FAWales.

Manager Martin O’Neill said he hadn’t seen the tackle when interviewed after the game but said the players had said the tackle was nasty.

O’Neill said after the game: “It’s a bad break.

“Seamus is a fantastic player and character – it’s a major blow for the lad, for his club and for us.

“Apparently it wasn’t the best challenge in the world – I haven’t seen it back – but naturally disappointed. He’s gone to hospital and I think it’s broken.

“I saw Seamus’ reaction – he was holding his leg up and it didn’t look good.

“He is a great player.

“He is having the season of a lifetime with Everton and with us.”

Wales boss Chris Coleman said: “First and foremost I think the most important thing is Seamus Coleman. We’re told that it’s not so good, which we are sorry for.

“Neil Taylor is not really that type of player but, if he’s got it wrong… I’ve not seen it again. He’s in the dressing room and he’s quiet and despondent.

“It’s a tough one for Seamus. Thoughts are with him first and foremost. We hope and pray it’s not such a bad one.”

Wales’ Gareth Bale said: “We never wish that on any fellow professional.

“Obviously we don’t know how bad it is but we wish him a speedy recovery.”

Ref Nicola Rizzoli showed no hesitation showing Taylor the red card, which everyone in the stadium knew.