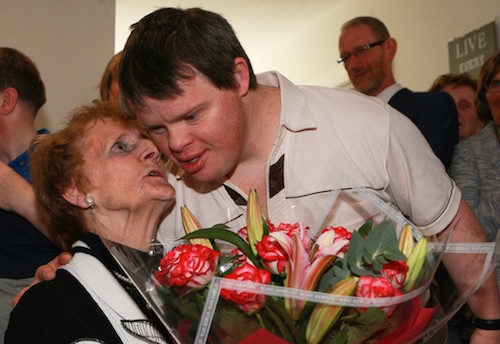 Our very own special angel Phil Murray – An Appreciation

Back in the day, ‘social media’ would have been a good night out by a group of journalists and twitter probably some class of an idiot. Nowadays with a mere keystroke and the world around you gets your message straight away.

Modern Letterkenny has come to expect the services we have, almost as a birthright, by virtue of the fact they are there. If you were to ask around, most people wouldn’t even know how these services came about, or indeed who were the prime movers and grafters who succeeded against the odds to get such services. So much is taken for granted nowadays and expectations are very high. It takes a certain character to boldly go, where no one had bothered to go before them and get things done.

Phil Murray was such a character, a lady of petite stature displaying a great flair for fashion, with a huge personality and bundles of ability. She devoted her life in Letterkenny to her family and the community. A loving wife and mother, when Phil settled here with her husband John and started her family, there was no internet, no mobile phones, no computers, no traffic jams and definitely no facilities or supports for children with special needs, in particular for their own beloved daughter Fiona. Phil took nothing for granted and set about putting things
right.

Phil was a battler who didn’t back down. She didn’t fear old established ways. If there was a way to be found, money to be raised, a problem to be solved – she put her heart into it.
Married to Dr John for 63 years and mother of Barry, Johnny, Roni, Emmet & Fiona who sadly pre-deceased Phil in 2013, she campaigned vigorously for support, funding and more especially education for children with special needs. By the late 1970’s – in fact 40 years ago this March, the dream of an education for their daughter Fiona and the children of 11 other parents became a reality, when they embarked on the founding of a crèche, then a school and two hostels to provide 4 day accommodation for the children, as they travelled from the length and breadth of the county.

It seems incredible, this county only 40 short years ago was basically living in the dark ages starved of funding, but as one of the founders of the Little Angels Association, Phil relentlessly devoted all her free time to raising much needed funds and pressing for state support for the school. Golf classics, competitions, cold wet Church gate collections, tickets and raffles – Phil was in the middle of everything. The new school was built at Knocknamona in the 80’s and attention soon turned to providing life long security for the adult past pupils. No, never and cannot, did not form part of the vocabulary. It was Phil’s wish the children would never face the prospect of institutionalism. They would have a modern loving home with state of the art facilities. The aspiration became a reality and Fiona House was opened in 2015. Sadly, Fiona for whom the house is named after, never got to enjoy or see the beautiful home.
Always leading from the front, incredibly in her spare time, she was a founder member of the ladies branch in Portsalon Golf Club. She became the first Lady Captain in 1972, respected throughout the county among her golfing peers. She was a pretty fine golfer too, playing off a decent low handicap, full of fun and enjoyed the craic with her playing partners over many years.

She later also became a Lady Captain in Letterkenny Golf Club, where she was to inspire many members to support and part with their cash for her much loved charity, Little Angels Association.

In recent years Phil’s health deteriorated. She enjoyed the care of her devoted John, family and a special group of people who took care of her needs as she required.
Phil’s dedication to improving the lives of many hundreds of children in Donegal will be remembered at a celebration of Little Angels 40 Years in the autumn of 2017. The annual golf open fundraiser for Little Angels will be held on the 17th August in Letterkenny Golf Club and Phil will smile upon the greens and we will putt for an Angel.
Ar dheis De go raibh a hanam dilis.