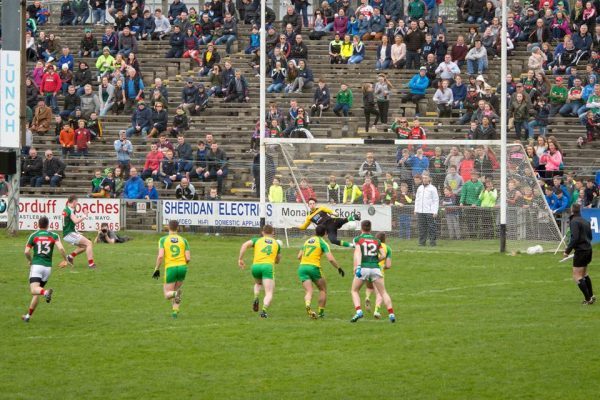 Cathal Mac Suibhne: Donegal lose the heads and the points in Castlebar

written by Chris McNulty April 3, 2017
Facebook0Tweet0LinkedIn0Print0
For the second week running Donegal dropped league points from a winning position and the campaign has ended on a little bit of a downer after the promise of recent weeks.
The report card still looks fairly healthy and Rory Gallagher’s charges certainly finish up in credit but the closing stages of the contests in Ballyshannon and Castlebar will grate with the boss.
Picture: Cillian O’Connor scores a penalty for Mayo against Donegal. Picture by Máirtín Mac Crábhagáin
There was plenty of talk during the week about the appointment of Cormac Reilly as the match referee due to his storied past with Mayo.
He would have been hoping for a quiet afternoon’s work and probably wouldn’t have said no to a chance to give some hometown decisions in order to make friends with the green and red army again.
He got his opportunity very early on and there was an amusing sense of inevitability around the ground as he awarded the hosts a penalty.
Mark Anthony McGinley’s stupid challenge on Cillian O’Connor was totally unnecessary as the ball played in had evaded the Ballintubber man.
Their coming together seemed to take place outside the box but regardless O’Connor dusted himself down and found the net with ease.
Donegal had made a promising start prior to the goal with smart points from Eoghan Ban Gallagher and Cian Mulligan but Mayo found their rhythm quickly and added some fine points to O’Connor’s major.
They were quite direct in their play and seemed keen to exploit a perceived weakness in Donegal’s full back line. Long, cross-field passes rained down on Neil McGee and co and caused some unease but the storm was weathered.
The Donegal defence regained their composure and forced their opponents to shoot from distance. Shane Nally nailed the best of a few cracking points that Mayo managed but plenty more efforts drifted wide.
Stephen Rochford’s team persevered with their risk and reward high press tactic of recent years but it suited Donegal as they gained control of the game by getting in behind Mayo thanks to the likes of Eoghan Ban, Mulligan and Jamie Brennan. That trio all upped their performance levels above what they had shown in previous outings and if they can reproduce something similar for the U21s on Wednesday night an Ulster Final will beckon.
Brennan was more involved in the physical stakes than usual, steaming into tackles and tracking back diligently. He kicked a brilliant point off his left and it was just reward after winning the ball himself before beating a couple of men and slotting over.
Much of Donegal’s good work came from the right side of the attack with the returning Jason McGee foraging well around the middle to keep the supply lines open.
Alongside him, Michael Murphy was a colossus. Mayo were powerless to stop his surging drives forward from deep and his sleight of feet saw him twice twinkletoe beautifully around oncoming tacklers.
The visitors looked in good shape at the break, three points to the good having played into the wind but it all fell apart in a messy closing quarter of an hour.
Mulligan kicked two sensational points after the half time cup of tae but inexplicably not one of his team mates would join him on the second half score sheet.
Donegal – and the man in the middle Reilly – lost their heads thereafter and contributed to their own downfall during a frantic spell where Mayo obliterated the gap on the scoreboard.
The first half sight of green and gold jerseys swarming forward was now replaced with seeing them penned in with nowhere to go. Passes suddenly were being played under far more pressure than before and a malaise of apprehension spread amongst the team.
This is where Mayo’s high press tactic works so well; it is the ideal way to chase down a lead. Their problems have arisen in big games when they concede too many goals and persist with the press, even when leading games leaving themselves exposed.
One of Mayo’s great strengths is their attacking half backs but they remained largely anonymous for much of the game. Micheal Carroll was tasked with keeping Lee Keegan company for the day and had been doing a very good job on the current Footballer of the Year. Upon Eoin McHugh’s introduction the marking setup changed with Carroll being sent further forward.
Almost immediately, Keegan boomed over a rousing point off his left and it could be argued this was the game’s pivotal score as it drew Mayo level and they sensed blood.
They didn’t let up on their way to the finish line with the excellent Tom Parsons and substitute Aidan O’Shea leading the charge. Much has been made of Donegal’s young guns and the vigour and energy they have brought to the team; Mayo countered that with old fashioned bulk and with 14 men, following Eamonn Doherty’s dismissal, Donegal found the going tough.
Since impressively holding onto a lead against Tyrone in Ballybofey, Donegal have now let two wins slip from their grasp, leaving three league points behind them in the process.
With Dublin and Kerry taking up the top spots in the final Division One standings Donegal remain, as one man said to me out the way out MacHale Park, in the long grass ahead of the summer.
Even though a day out at Headquarters for a league final and a crack at the Dubs would be appealing for a lot of supporters, as usual the players and management have eyes only for the bearpit that is the Ulster Championship.
Perhaps the long grass is the best place for us right now.
Cathal Mac Suibhne: Donegal lose the heads and the points in Castlebar was last modified: April 3rd, 2017 by Chris McNulty
Facebook0Tweet0LinkedIn0Print0
Tags:
Cathal Mac SuibhnedonegalMark Anthony McGinleyMichael MurphyNeil GallagherRory Gallagher