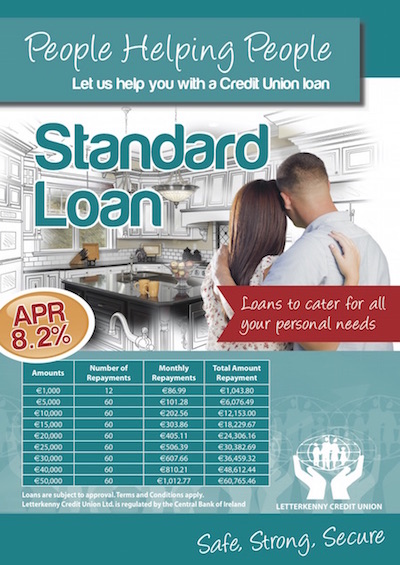 Letterkenny Credit Union is launching a new Home Improvement loan campaign for 2017 to cater for the increasing popularity in home upgrades and renovations.

As property prices continue to rise, many households are opting to revamp their existing homes to avail of tax breaks under the Home Renovation Incentive Scheme (HRI).

Letterkenny Credit Union has recognised the growing trend towards home improvements and is launching a new loan campaign with a very competitive 8.2% APR rate** to help people get started on their dream renovations and benefit from the HRI scheme.

Gordon Randles, Manager/ CEO of Letterkenny Credit Union says “We anticipate that many homes in the Letterkenny area will opt to give their home a facelift this year because of the Home Renovation Scheme, but with around €16,000 the average amount being spent on renovations, we understand that many might not have the funds necessary to get started. At Letterkenny Credit Union we know the difference home improvements can make to people’s lives; increasing comfort, adding space and transforming a house into a home and we’re here to help. We are offering our home improvement loan with realistic terms and repayments can be made in a way that works best for each individual. We’ve done everything to ensure that everyone feels ‘at home’ with our loan process.”

Gordon continued “Whatever exciting plans people have for their homes in 2017, and no matter how big or small their renovations, we would encourage them to contact Letterkenny Credit Union and find out how we can help. Remember, we don’t charge administration fees or transaction charges, and should someone pay back a home improvement loan early, there are no penalties. So call in to us today or log on to www.lettereknnycreditunion.ie for more details.”