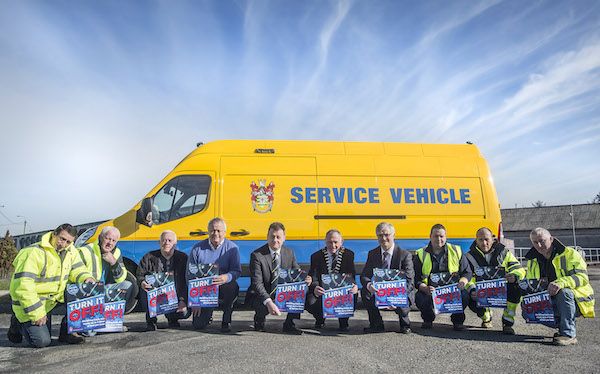 Council launches campaign to encourage its drivers to save fuel

Donegal County Council has launched a new campaign promoting greater awareness among its drivers of how they can improve energy performance in their fleet.

This campaign is being launched as part of the Councils drive to improve energy efficiency in line with their ISO 50001 accredited energy management system.

“In our Energy Policy we have committed to achieving energy performance improvements of 33% by 2020,” says Director of Service John McLaughlin.

“As part of this process we identified our fleet of 200 vehicles as one of a number of significant energy users within the organisation and we have been working closely with our staff on raising awareness of a number of issues affecting our fleet’s energy efficiency. And idling vehicles has been identified as one area where energy savings can be made,” says Mr. McLaughlin.

Idling happens when a vehicle’s engine is running while the vehicle is not in motion. Drivers are sometimes forced to idle in traffic but in most situations idling is not necessary.

Idling is a habit that drivers can break, especially when they realise how harmful it can be to the environment.

Idling increases the amount of vehicle exhaust in the air. This exhaust contains many pollutants that are linked to asthma and other lung diseases, allergies, heart disease, increased risk of infections and cancer and other health problems.

An operating vehicle emits a range of gases from its tailpipe into the atmosphere, one of which is carbon dioxide, the principal greenhouse gas that contributes to climate change.

A new information leaflet and poster with a simple ‘Turn it Off’ message has been developed as part of this campaign and targeted toolbox talks with Council staff in each depot around the county are key features of this awareness raising initiative.

· Warm up your engine by driving your car, not by idling. The best way to warm the engine is by easing into your drive and avoiding excessive engine revving. After just a few seconds your vehicle is safe to drive. The vehicles engine warms twice as quickly when driven.

· Warm up the inside of your vehicle by driving not by idling. Sitting in an idling car means you are breathing in more of the dirty exhaust that leaks into the car cabin. Any warmth you may get from a car heater is not worth the damage to your health.

· Idling is harder on the engine than restarting. Frequent restarting causes only about €10 worth of wear-and-tear per year, whereas idling leaves fuel residues that damage engine components and cause higher maintenance costs over time.

· Two minutes of idling uses the same amount of fuel as 1.6km of driving, so the message is simple – engine idling wastes fuel and gets you nowhere.

Council launches campaign to encourage its drivers to save fuel was last modified: April 11th, 2017 by Stephen