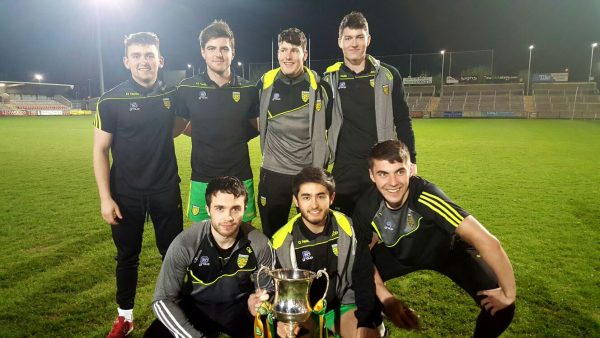 Rarely has a club had such strong representation on a Donegal panel that has won an Ulster title as the Gaoth Dobhair club on the current Donegal Under-21 side.

The Magheragallon club has seven players on the Donegal panel that won last night’s final. (picture above by Aodh Máirtín Ó Fearraigh)

Last night, Michael Carroll netted Donegal’s third goal in the 3-17 to 0-13 win over Derry, palming home in the final minute of the game at the Athletic Grounds.

Carroll, who has already graduated to the Donegal senior team, ended the night with 1-2 to his name.

Cian Mulligan, who scored a key point early in the second half, joined Carroll in the starting team alongside Dáire Ó Baoill, who has had an excellent campaign so far.

Kieran Gillespie was one of the main players in Declan Bonner’s squad, but the recurrence of a hamstring injury – sustained in the warm-up before the Allianz League game against Mayo – meant that he was unavailable.

Niall Friel, Gavin McBride and Naoise Ó Baoill are other members of the Donegal Under-21 side. All of them have come through Gaoth Dobhair’s resurgent underage system, which took off in 2005 under the direction of Tom Beag Gillespie, Donnchadh Mac Niallais and Brendan Boyle.