The column will be written by members of the Scally/McDaid GP Practice in Letterkenny.

Hay fever is caused by an allergy to pollen, which is the fine powder-like substance produced by plants, flower, trees and indeed weeds for the process of fertilisation. Our immune system reacts to pollen releasing chemicals which causes inflamation in the nose and eyes. Sometimes the throat is also affected.

The most common pollen is grass and affects people every year during the grass pollen season from May to July while tree pollen affect people from March to May usually. Weed pollens unfortunately are around from early Spring until early Autumn and can affect people longer.

Hay fever tends to be common in families and we often find patients with asthma or eczema are more likely to develop hay fever and vice versa.

Symptoms vary and some people are only affected mildly with symptoms that come and go. Others are affected every day during the pollen season.

Doctors usually diagnose hay fever from the symptoms you describe that occur during the hay fever season. We often ask if there is a history of asthma or eczema in the family. If we suspect hayfever we will usually suggest treatment for your symptoms.
Treatment 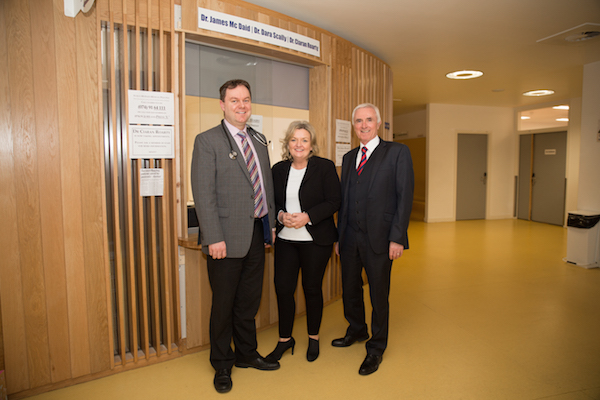 Doctors Ciaran Roarty, Dara Scally and James McDaid at their surgery in Letterkenny.

We cannot totally avoid pollen during the hayfever season but we do find that symptoms may be less severe if we can minimise our exposures. Common ways to do this include:

2.Wear wraparound sunglasses when out

3.Avoid grass cutting if possible as well as large grassy areas and camping

5.Showering after being outdoors in the countryside

6.Keep car windows shut and use a pollen filter for air vents.

7. Vaseline around the nose can also help

If you do not see an improvement in your symptoms after 2-4 weeks you should discuss this with your doctor. It may be necessary to prescribe a different treatment or add on another medication. These include different nasal sprays, nasal saline washouts and certain tablets. Your doctor will determine which of these treatments may be most beneficial to you after a thorough history and examination.

The column is intended as advice only. Should any of these issues affect you, or indeed if you have any queries relating to your health, you should contact your General Practitioner.