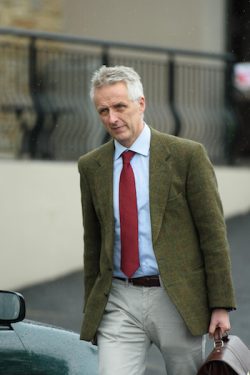 The family of a farmer trampled to death has said the Department of Agriculture and the Irish Farmer’s Association should raise more awareness of the potential dangers when handling bulls.

The appeal was made by the family’s solicitor at the inquest of the late Patrick Dowds at Letterkenny Coroner’s Court in Co Donegal.

The court heard gruesome details of how the 65-year-old twin was mauled to death and his brother George suffered serious injuries when the bull attacked them during separate incidents on their farm in Burt on September 16th last year.

Mr Dowds was found by relatives in a field having suffered serious chest injuries after being trampled on by the Charolais bull.

His twin brother George, who lived with his sibling, later escaped with his life when the bull turned on him as he searched for his missing family member.

He contacted other relatives and they went to put away the bull and other cows so they could safely search for his missing brother Patrick.

However, although he remembered nothing of the attack, he believes he was attacked by the bull and had to be taken from the field by other family members.

His brother Patrick was found a short time later at the back of the six-acre field having been dragged through the field and his shirt partially torn off him by the bull.

The owner of the bull, who was a neighbour of the Dowds brothers, said the three-year-old animal had shown no previous sign of aggression.

Mr John McDaid had not charged the Dowds for the loan of the bull to cover their 30 cows, describing it as a simply a “neighbourly gesture.”

He did not agree with suggestions from Mr Seamus Gunne, solicitor for the Dowds family, that the bull may have become aggressive because the other cows had been removed from the field.

“That breed of a bull would never show aggression, that would happen more in Friesians. You always have to be cautious and have respect and you naturally take a stick with you.

“But no, if he had one cow they are usually happy enough,” he said.

Pathologist Dr Gerry O’Dowd told the court that he found significant external injuries to Mr Dowds face and head and that he had also suffered a total of 17 rib fractures as well as fractures to his sternum and breast bone.

He said death was due to respiratory failure secondary to chest trauma as a result of being trampled by a bull.

Solicitor for the Dowds family, Mr Seamus Gunne said it cannot be understated that there is a requirement for “vigilance and alertness and a professional approach when dealing with them (bulls).

“I’m not sure if that is well enough stressed by the IFA and Department of Agriculture. In a space of two hours this bull has killed a farmer and was in the course of killing another. The message has to go out there that you cannot be relaxed in any way in dealing with these animals – especially on covering season. If that message goes out then Patrick’s life will not have been in vain,” he said.

He said he did not wish to add to Mr Gunne’s warning about the need to be vigilant around bulls because the farming community are aware of the dangers but that this warning could remind them of those dangers.