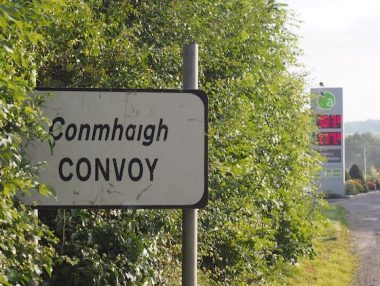 The village of Convoy is in mourning following the death of a local resident in this morning’s boating tragedy on Lough Erne in Co Fermanagh.

The woman, a Chinese national, died after falling overboard while on an Easter break with her husband and two children.

The couple had traveled from their home in Convoy to spend a couple of days on a cruise boat on the waterway in Co Fermanagh.

The couple lived in the Flaxfields estate on the outskirts of the town.

Local county councillor Liam Doherty said the couple was private and little is known about them.

The dead woman’s husband has been named locally as Stephen McKinney who is understood to be originally from Strabane in the neighbouring Co Tyrone.

Councillor Doherty said “It is sad to think that this young family went off on an Easter break and this tragedy visits them. It’s just so sad.

“I have spoken to a number of people locally and people did know them to see but it appears that they were private people. I didn’t know them personally.

“I spoke to a couple of people on the Flaxfields estate who knew them to see but did not know much about them. They are just upset that such a tragic thing has happened to a young family with their whole lives ahead of them.”

Councillor Doherty said he understood that the woman’s family were now trying to arrange visas to Ireland so they could visit here following the woman’s death.

Meanwhile, the dead woman’s husband and the couple’s two children, aged 11 and 13, were being treated for shock.

The man is understood to have heard his wife falling into the lough and tried to save her.

He called the emergency services who tried to perform CPR but she was pronounced dead a short time later.

The couple are understood to have moored at Devinish Island when the tragedy occurred just after 1am.