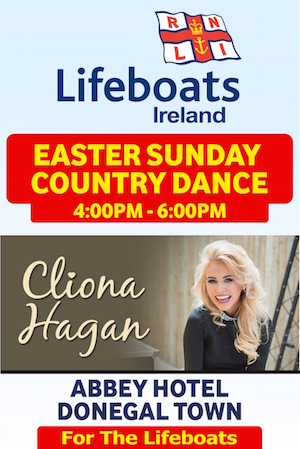 Singer Cliona pushes the boat out for RNLI

Donegal Bay RNLI are holding a Country Dance with ​Cliona Hagan on Easter Sunday afternoon in the Abbey Hotel, Donegal Town from 4 to 6pm. ​

The RNLI has three Lifeboats in the county – Bundoran, Arranmore and Buncrana and a total of 55 Lifeboats in Ireland.

Paul O’Sullivan, Chairman of Donegal Bay RNLI told Donegal Daily “We intend to make this an annual Easter Sunday event and we would especially invite families to come along, enjoy themselves​ and help a great cause”

Cliona is appearing in the Late Late Show Country Special tonight on RTE television. All proceeds will go to the RNLI Lifeboats. Tickets on the door @ €15 & €7 (U16’s) Under 5’s are free.

Singer Cliona pushes the boat out for RNLI was last modified: April 12th, 2017 by Stephen