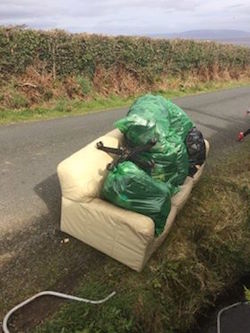 This is the lengths some people will go to in order to avoid paying dumping charges.

A Donegal Daily reader sent us this picture after finding this couch along with six full bags of rubbish, a swivel chair and a fire grate.

The shameful scene was found on the Crehennan Road in Quigley’s Point on Tuesday.

“It was dumped in broad daylight between 9am and 3.30 pm approximately and in view of houses,” said the disgusted reader.

Donegal County Council has been informed of the dumping.