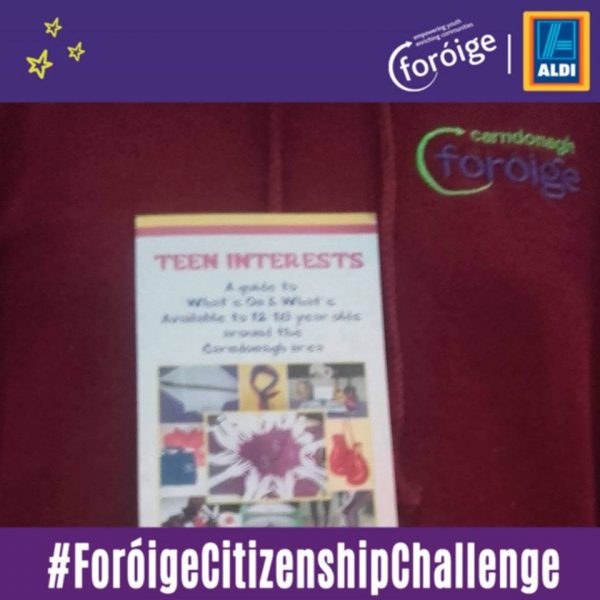 The Carndonagh Foroige Club have again this year entered the Foroige Youth Citizenship Awards in partnership with Aldi.

This year they took on a project called Teen Interests which was a guide to what’s on and what’s available to 12-18 year olds aroundthee Carndonagh area.

Each member of the Club conducted a survey of the community through a questionnaire. This survey confirmed that there was a lack of knowledge to what was available for 12-18 year olds in the area.

Their next step was to advertise for information through local press, radio, Facebook, community newsletter and the Club. They also made posters to put up on the public notice boards around the town.

Marie Barrett came to club to teach a photography skills workshop. When they had all information collected a brochure was made up. The Citizenship Committee collected the Brochures and the decision was made to distribute the brochures to all 7 National Schools & Carndonagh Community School.

The Club conducted a walkabout to meet with the activity providers and this was thoroughly enjoyed by all the young people. All feedback received was very positive. This was because the brochure highlights what’s available to young people in the area which they may not have known about previously. It also includes Jigsaw & Volunteering opportunities which people felt was important to include everything in the same brochure.

A spokesperson said: “Our group now looks forward to attending the Foroige Youth Citizenship Awards Ceremony in the Citywest Hotel in Dublin on the 29th April where the project will be judged on a National level. We would like to thank everyone who contributed towards this brochure  and gave feedback.”