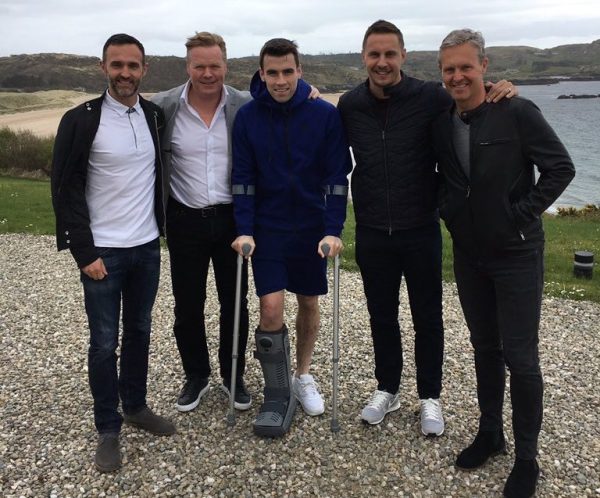 Everton manager: Coleman is “positive and ready to start again”

During a press conference, Koeman stated that Coleman will return to Everton to begin recuperating, and noted that Coleman has a strong sense of determination and positivity.

Coleman suffered a double fracture on his right leg after being tackled by Welsh defender Neil Taylor during the Ireland vs. Wales World Cup qualifier at the Aviva Stadium three weeks ago.

Taylor was immediately shown the red card however it could take Coleman up to a year to recover from the injury following surgery at the end of March in Dublin.

Koeman remarked that Coleman is extremely grateful for the supportive messages he has received from fans around the world; with dozens of letters and over 2,000 emails of support being delivered to Everton Football Club from as far as South America and New Zealand.

During their Donegal visit, Koeman and Jagielka commented that Coleman seemed very positive. This was reiterated by Koeman during the press conference ahead of Everton’s Premier League clash with Burnley at Goodison Park.

Today we visit Seamus Coleman and his Family! Looking strong and positive pic.twitter.com/T0bSx5yCoI

Koeman and Jagielka had a day off from training, and decided to make the trip to see Coleman in his hometown of Killybegs.

He said; “I think he deserves the support, It was great to see Seamus, there’s a lot of support from his friends, the place, and the management. I think it’s good to do that for the boy.

The Blues manager also remarked that Coleman has a strong sense of determination and feels he is now ready to begin recuperating.

“I think he has lost that frustration [of sustaining the injury], he is now ready to start his recovery.

“He will come back in one week and he will start to recover well – the boy is really that type of professional.

“He put it away and he is now strong. He’s positive and ready to start again.”