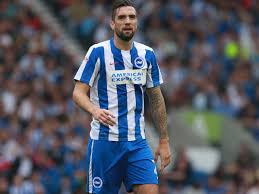 Duffy has been out of action for six weeks having undergone an operation on a broken metatarsal in a 3-0 win over Nottingham Forest in early March.

However, this afternoon Glenn Murray and Solly March scored the goals for the team managed by Chris Hughton in their 2-1 win over Wigan Athletic at the Falmer Stadium.

The three points mean Brighton, who have three games to play, are 15 points ahead of Huddersfield Town, who started the day in third place. Huddersfield have two matches in hand so if they win all five remaining fixtures can still join Brighton on 92 points should Brighton lose their last two outings.

However, Brighton’s goal difference is currently +36 to Huddersfield’s +5 so unless there’s a freakish set of results with huge margins, the south coast side will be in the top flight next season. Brighton are seven points ahead of second placed Newcastle United, who lost 3-1 at Ipswich Town today. Huddersfield are away to Derby County this evening.

Twenty-five-year-old Duffy is Derry born and the son of Letterkenny native Brian and grandson of the late Mickey Duffy from Ard O’Donnell and established himself as Republic of Ireland centre-half at Euro 2016 in France.

Today could be a big day but a tough game ahead . Let’s all believe and stay together and get us over that line #bhafc #seagulls 🔵⚪️ pic.twitter.com/66JY2Hcug5

Delight for Shane Duffy as Brighton all but seal promotion to Premier League was last modified: April 17th, 2017 by Chris McNulty