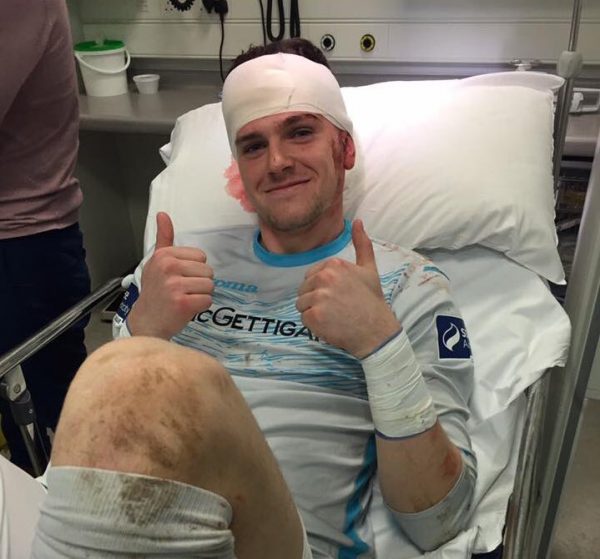 Finn Harps goalkeeper Harry Doherty says he felt like he ‘wasn’t there’ after being involved in a serious clash of heads on Monday evening.

Play in the EA Sports Cup game was stopped for 25 minutes.

While Mailey was able to walk back to the clubhouse, Doherty came off the worst and was put on an ambulance stretcher before being taken to Letterkenny University Hospital.

The players were attended to by physios Colm O’Neill and Tommy Scanlon and Finn Harps club doctor Paul Armstrong.

Doherty, who is a diabetic, drifted in and out of consciousness as he was treated on the pitch in front of around 400 concerned spectators.

“I didn’t know what was going on,” Doherty, who was released from hospital, said.

“I felt like I was there but, at the same time, it felt like I wasn’t there. I just kind of remember the physios and Ollie (Horgan, Harps manager) beside me asking me if I was alright.

“It took me a while to realise what had happened. I was so groggy and dizzy I didn’t know how long I was down until they told me afterwards.”

The sight of Finn Park steward Michael Gallagher pouring a bucket of water and sweeping blood from the pitch told the story of the severity of the incident.

Horgan – who earlier in the game saw striker BJ Banda taken to hospital in an ambulance after suffering a knee injury – dashed from his position in the dugout to check on his players and appeared visibly distressed when he made his way back to his seat.

Doherty remembers vividly the incident in the 69th minute of the game.

He said: “I remember nearly all of what happened. I just ran out to clear the ball over the defence and it was outside the box so I went to head it. That’s when me and Packie just clashed heads.

“I went down and felt very dizzy.

“You have to take the positive out of something like that because it could have been way more serious. Thankfully we’ll both be ok now though.”

Doherty received seven stitches to a head wound after being admitted to hospital.

Mailey was patched up and released again on Monday night, but Doherty was kept in for further observation.

“I have to rest up now and take it easy so I’ll not be able to rush back into anything,” the 21-year-old Cockhill man said.

“I’m feeling okay no again. I’ll have a headache for a while and I’ll be a bit groggy at times. It’ll be a while before I feel myself again.

“I want to say a huge thanks to the medics that were involved. They made sure I was looked after properly and everything was okay on the pitch before I was moved. I was lucky the medics were all nearby and able to attend to me quickly.”

Just last month, Doherty had made his Harps debut when replacing the concussed Ciaran Gallagher in an away game against Bray Wanderers.

Doherty, who was called up to the Irish Under-21 panel in February, said: “When I was in hospital, I was talking to Ciaran about that and how strange it was. That’s just football sometimes and the life of a goalkeeper!”