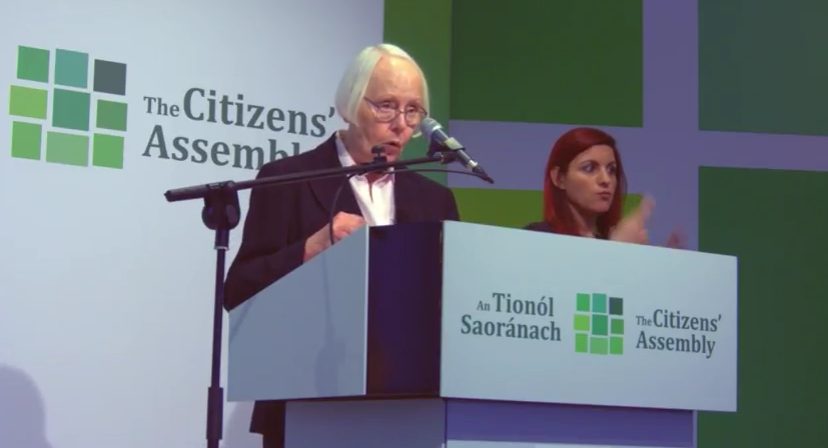 The Citizens’ Assembly have today announced that they have reached the overwhelming consensus that Ireland’s abortion laws should be changed.

The votes will form the recommendation that will go to the House of the Oireachtas, meaning a possible Constitutional Referendum.

Members of the assembly today voted on three ballots. The results of which outline that Article 40.3.3 should not be retained in full, and instead should be amended, with the Oireachtas having exclusive power to make the law on these issues.

Chairperson of the assembly, Ms Justice Laffoy, announced the results of the first ballot at noon today.

Ms Justice Laffoy said that “the voting on ballot one which we’ve just seen represents a clear decision that the members seek to change the status quo.”

“If the Oireachtas was to act on this initial recommendation, a constitutional referendum would be required.”

The 91 present members of the Citizens’ Assembly also voted on a second ballot this afternoon, where option one will be for the Eighth Amendment to be repealed or deleted entirely, or option two where they feel it should be reformed or replaced.

The results of the second ballot was announced at 2:30pm, with 39 members (44%) of the assembly voting to repeal the Eighth Amendment entirely, and 50 (56%) voting to amend or replace it. 2 members ticked ‘prefer not to state an opinion’.

They then moved on to ballot three, which allows participants to suggest how Article 40.3.3 could be amended.

Ms Justice Laffoy explained that the first option on the third ballot “would grant the Oireachtas exclusive power to make the law on these issues.”

She also explains that the second option would “limit the lawmaking powers of the Oireachtas.”

They then entered into round table discussions until 3:30pm.

Ms Justice Laffoy clarified ballot three further by stating that; “Draft ballot three may result in an outcome that allows for the liberalisation of the current legal regulation of termination of pregnancies or alternatively an outcome which results in the rights of the unborn being given greater protection.

“In either scenario the outcome could be either liberalisation or greater protection for the unborn.”

A question and answers session followed, in which a spokesperson for table four asked that the ballot paper for ballot number 3 be amended. She said “it is a bit worrying that the rights of the mother are not included.”

The ballot paper was amended to include “the rights of the woman.”

There was also concerned raised regarding how SC Brian Murray’s paper may have influenced ballot two.

The results of ballot three were announced at 6:05pm.

Ballot 4b will take place tomorrow.

Ms Justice Laffoy concluded today’s meeting by saying; “As we reach the climax of our work, I know that many members will take their role very seriously, and that undoubtedly happened today, in so doing, when engaging in discussions this weekend, I would encourage you to be respectful of your fellow citizens and those of alternative viewpoints of your own.”

The last referendum held in Ireland on the topic of abortion was in 1992, meaning that no one under the current age of 43 would have been able to vote. The subject of the 1992 referendum was concerned with whether or not the risk of suicide in pregnant women could be considered grounds for abortion, which was voted against by 65.5% of voters.

To watch today’s sitting of the Citizens’ Assembly, see below: