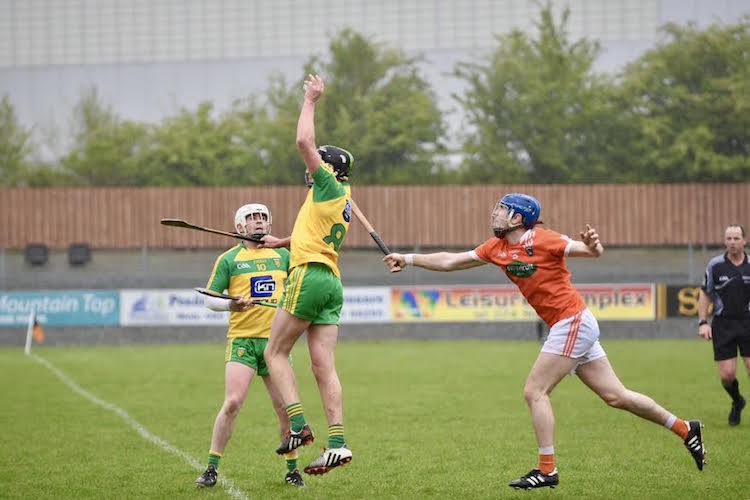 Ardal McDermott has had this date marked in his diary for some time now – and Donegal began their Nicky Rackard Cup quest with a nine-point win over Armagh.

In the O’Donnell Park drizzle, Donegal’s bid to make it back to Croke Park started how they might’ve wished as Davin Flynn’s goal early in the second half helped propel them to victory.

The second verse was barely 20 seconds old when Flynn hammered to the roof of the Armagh net after collecting Danny Cullen’s probing pass.

Flynn had been central to Donegal taking a hold of things late in the first half and his goal gave Ardal McDermott’s team sufficient breathing space.

As Flynn took his tally to 1-4 in the 53rd minute, opening up an eight-point gap, he took a late hit from Armagh wing-back Tiarnán Nevin, promptly given his marching orders.

Donegal had been wasteful for a period in the first half but once they took a grip of the contest before half-time they never seemed in danger.

Led by the classy Danny Cullen and spurred by the majestic Flynn, Donegal showed that McDermott’s vision of seeing his side line up for the final at Croke Park in June is one with a foundation beneath it.

Donegal – who have already won Division 3A and earned promotion into Division 2B in the League – came into this one rested having opted not to field in an Ulster SHC relegation play-off against Down that was scheduled for last Sunday.

‘Look what Donegal did, they went away for a training weekend, wouldn’t even play Down,’ McConnell had said.

‘Donegal are probably getting more money pumped into them than Armagh is. Who’s right and who’s wrong?’

Adding further fuel to a niggly contest was the fact that Donegal had Declan Coulter taking sentry at corner-forward. A Nicky Rackard All-Star winner in his time with his native Armagh, Coulter is hurling these days with Donegal having moved to live in Killygordon.

Coulter had a couple of big chances to get one up on his old colleagues in the early exchanges. After miscuing with his first, he opted to fire off the stick only to swing at thin air with Colm Melaugh screaming for a pass inside.

Coulter, though, did get off the mark in the 17th minute with a thundering effort that almost shaved the pain from the crossbar on its way over.

By then, Donegal were couting the cost of six early wides as Armagh – thanks to Cahal Carvill, Connor Devlin and a pair of David Carvill frees – led 0-4 to 0-2.

They were ahead for the first time when a quickfire double by Lee Henderson and Flynn tipped the scales in their favour.

Flynn, a Tipperary man who hurls with Roscrea, arched over again for a two-point lead and when Joe Boyle, growing into the game with every passing moment, drilled over, Donegal were looking good.

They led 0-10 to 0-6 as Henderson clipped over a free in added time and when Flynn found the net, with the half-time refreshments still being digested, Donegal were on their way to a fine win that places them in the quarter-finals of the competition.