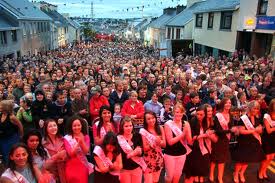 Government’s festival funding for Donegal is “derisory” – Pat the Cope

Deputy Pat the Cope Gallagher said he is seeking a meeting with Minister Shane Ross over what he described as a “derisory” level of funding for festivals in Donegal.

The West Donegal TD has labeled the combined allocation of €49,750 for twenty different festivals within the county by Minister of State Patrick Donovan and Fáilte Ireland as minimalist and derisory.

He said “It is a shocking poor level of support for volunteerism and the voluntary efforts of the various communities and committees which run festivals and gatherings right throughout Donegal, it is further testament that this Government simply does not support rural communities and the efforts of voluntary groups working to improve and enhance their respective areas in Donegal.”

Pat the Cope added the running of festivals, rural gatherings, cultural events and other summer activities are the bedrock for visitor activity and are the focus for tourism on a local basis in many of our towns and villages within Donegal.

He said all of these activities and festivals are ran on a voluntary basis but in an effort to enhance their communities attractiveness for visitors and for retaining visitors for longer durations within their respective areas.

“The current allocation of €49,750 is totally inadequate in the context of Donegal as a county, it cannot adequately cater for the amount of demand from the numerous communities and groups seeking funding to run their town or village festival, secondly for existing festivals within the county it is leading to difficulties, as the costs of running festivals is ever increasing with insurance costs rising etc., the chronic under funding of festivals through this grant scheme is having adverse effects on the annual running of many festivals.”

Pat the Cope stated that it is particularly disappointing to note the level of grant aid approved for the Mary from Dungloe Festival of € 3,000 especially as this is the 50th year of the Festival, similarly many other festivals throughout Donegal which received lesser amounts of funding that what their applied for.

“It is also evident the numerous festivals failed to be funded at all. The entire funding level for festivals needs to be reviewed by Fáilte Ireland and the Department of Tourism, as it is my contention that resources and money invested in local festivals reaps a greater dividend for rural communities and for business activity than any other tourism measure, it is a proven way of creating tourism activity right throughout Donegal but in order to do that it requires credible funding levels.

“The allocations made by the Department of Tourism are grossly inadequate, fail to make the necessary impact, are minimalist in approach and fail to deliver for rural Ireland despite the plethora of Government assurances on how there are prioritising regional growth and addressing rural decline.

“I am seeking a meeting with Minister Shane Ross to express my disappointment regarding the levels of funding and to directly impress upon him the necessity to properly fund and support festivals in rural areas and especially in rural Donegal,” concluded Pat the Cope.