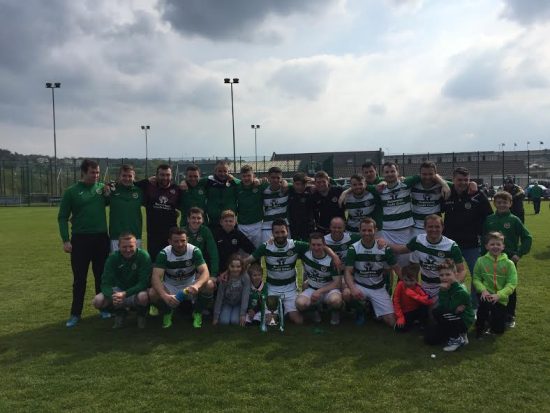 A familiar play had an equally familiar ending as Cockhill Celtic retained hold of the Donegal News Ulster Senior League Cup this afternoon in Bonagee.

A Jimmy Bradley goal late in the first half saw Cockhill take receipt of the silverware for a fifth successive season and tee them up for an unprecedented fifth League and League Cup double in a row.

The goal, in the 41st minute, was typical of Cockhill and their set piece prowess. Gerry Gill’s wonderful deep corner was headed back in by Peter Doherty and Bradley shot high into the roof of the net from close range.

Ryan Varma might have done better when presented with a chance late in the half and it was the Hoops might have doubled the advantage early in the second half, but Bradley shot at Grimes and Gerard McLaughlin headed wide from a Gill free.

Bradley is Cockhill’s top scorer this season and again led the way here as the champions showed all of their big game experience after hitting the front and were firmly in command, even if they did just have Bradley’s goal as security.

Cockhill could have sealed the deal, but they were denied by the post when Mark Moran flicked goal-wards after Doherty directed another Gill corner into the mix, while Paul McDermott was thwarted by Grimes.

In the final minute, Garbhan Friel should have clinched it, but riffled over the top after being put through by Moran.

Derry, who had first team manager Kenny Shiels present in the dug out, lined out with a strong side that included the likes of Joshua Daniels, Rory Holden, Cathal Farren, Eric Grimes and Scott Whiteside, all on the fringes of or close to the Candystyripes’ senior panel.

It was City who had the better of a cagey and tight opening, but they would ultimately pay for not making a good early spell count.

After Holden was taken down on the edge of the area, Farren fired the free off target while Lee McColgan called Cullen to action, but the Cockhill player-manager was equal to it.

It took the intervention of both Cullen and Derek Doherty to keep the Cockhill sheet clean in the 20th minute. 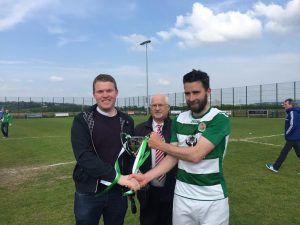 Doherty denied Farren, who looked set to add to his tally of goals for the City second string after a good move involving Ronan Wilson, Delap and Holden, whose shot was well parried by Cullen.

Derry were always dangerous on the break and Adrian Delap, after working a clever give-and-go with Farren, scuffed a shot at Cullen early in the second half.

The game was preceded by a minute’s silence in memory of Nathan Fullerton and Nathan Farrell, the two Buncrana teenagers who tragically lost their lives in a road traffic crash in the early hours of Saturday morning.

Cockhill had won this Cup in each of the past four seasons and defeated Fanad United 5-2 in the semi-final, while Derry were looking to bridge a gap to their last League Cup win, back in 2001.

Since suffering a first USL loss since the summer of 2012 when Swilly Rovers caused a shock upset in January, Gavin Cullen’s men have not been the force of old and saw a big lead in the League eroded away; though things are still firmly in their own palms ahead of a final day joust at Swilly next weekend.

The Inishowen side came in off the back of relinquishing their Knockalla Caravans Senior Cup following a penalty shoot-out defeat to Glengad at The Crua last Sunday, but now they put their attention towards retaining their League title – and securing a fifth USL League and Cup double in succession.