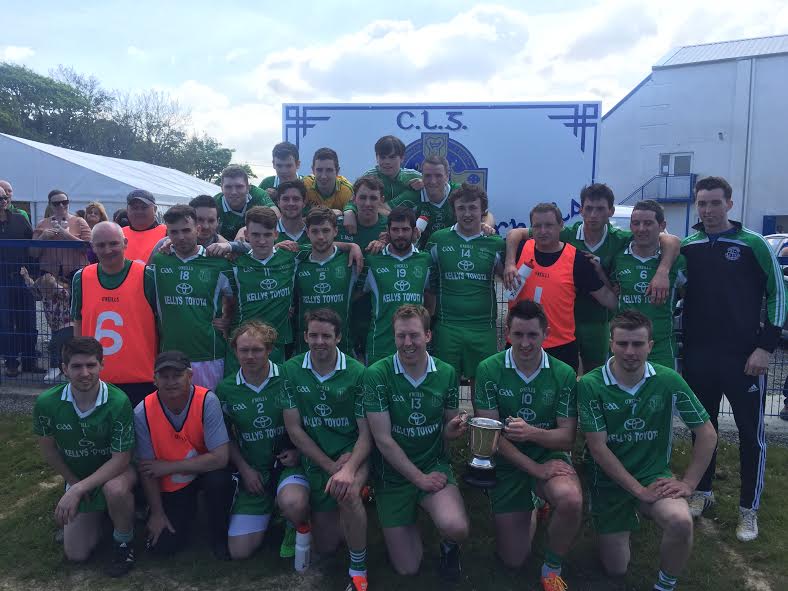 St Naul’s held off a big fight from Cloughaneely’s reserves to win the Junior final at the Donegal Comórtas Peile na Gaeltachta finals at Pairc Naomh Fionnan this afternoon.

St Naul’s had five to spare at the finish, but Cloughaneely stormed back into it to keep St Naul’s on the toes.

John McNulty’s St Naul’s collected the title after having the spade work done with a pair of goals either side of half-time.

The opening major came in the 21st minute as St Naul’s took a gift-wrapped present. After Jamie Murray boomed over a point, the St Naul’s full-forward took full advantage after Michael McGinley’s kick-out was popped into the arms of Stephen Griffin.

Five minutes into the second half, McCole batted home after Des McGroarty squared.

Cloughaneely got one back when Gallagher’s long range effort flew into the net and the home side might have had a second but Cathal Charlton beat away a stinging drive from Ronan Cannon.

St Naul’s were obvious favourites for victory here. Just relegated to Division 3 of the All-County League at the end of 2016, their first fifteen would have been well fancied to make light work of the hosts’ second string.

Cloughaneely, though, made a fine fist of things and former Donegal player Joe Friel slammed to the net from Ciaran Gallagher’s ball in to reduce the arrears to six midway through the second half.

Friel scored 1-2 after his introduction and helped Cloughaneely fight back, but St Naul’s had done enough.

Yesterday, McCole and Barry Griffin bagged goals in a 2-12 to 0-5 semi-final win over Gaeil Fhánada to put St Naul’s into only their second Junior final – their previous visit had been a 2013 loss to Gaeil Fhánada in Glencolmcille.

Donegal Under-21 McCole and Stephen Griffin, an All-Ireland panellist from 2012, helped lead the way for the Mountcharles side, who were well on their way to collecting their first Donegal Junior Gaeltacht title when Stuart Johnston fired them 0-8 to 0-1 in front with just 12 minutes played.

Griffin, Rose and a Griffin free started the ball rolling before Cillian Gallagher clipped over for Cloughaneely.

But there was already a firm feeling of inevitability about things as Griffin, Edward Kane, Rose and Shane Conneely stretched the lead before Murray’s goal.

Cloughaneely came closer, aided by those second half goals from Gallagher and Friel, and they were threating to upset the odds, but Cathal Lowther spun over and St Naul’s had sufficient breathing space.