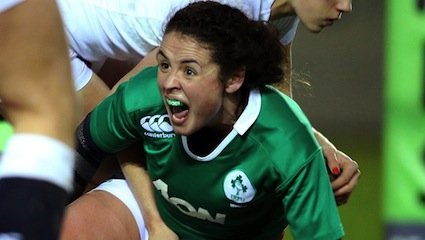 written by Chris McNulty May 3, 2017
Facebook0Tweet0LinkedIn0Print0

Three Donegal players have been named in an Ireland training panel to prepare for this year’s Women’s Rugby World Cup – which is being held in Ireland in August.

Nora Stapleton, Larissa Muldoon (above) and Laura Feely are included in the panel of 48.

Ballybofey woman Feely, who plays with Galwegians, is one of only two uncapped players selected by Tom Tierney, the Head Coach, with Stapleton and Muldoon firm regulars in the Irish squad.

Speaking at the confirmation of the squad, Tierney said: “From the November tests and throughout the Six Nations, we wanted to develop depth in the squad and provide players with the opportunity to put their hand up for selection for the World Cup.

“Finishing in second place in the Six Nations was a positive result for the team and we will look to build on this prior to August and the World Cup.

“The main goal for the coming months is to have our players as best prepared as possible for the World Cup.

“It’s a huge opportunity for the players, and for the country, to have an event as big as this one on our door step and we want to give the players every opportunity to perform over the course of the competition.”

The players selected will be involved in both skills and national camps over the coming months, and will play two warm-up games against Japan and a training camp with Spain, in the build-up to Ireland’s opening World Cup game against Australia on the 9th August.

The final squad for the Women’s Rugby World Cup will be confirmed in July.