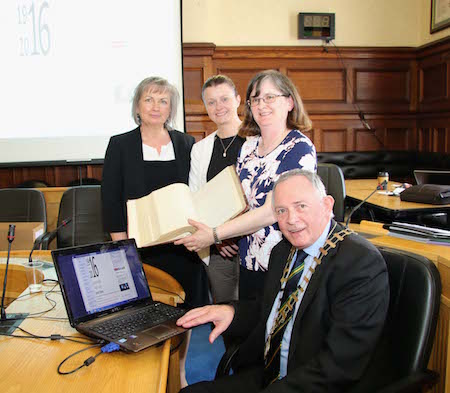 Check out the 1916 council minutes in digital format

written by Stephen Maguire May 5, 2017
Facebook0Tweet0LinkedIn0Print0

Speaking at the launch Cllr. Slowey said that the digitisation of these records assists in preserving this invaluable source of information for a crucial time in our recent shared history; putting them online makes them accessible locally, nationally and globally and allows researchers to carry out local, family and academic research.

These records are available for viewing at www.donegalcoco.ie.

In 1916 there were several local authorities in existence, which apart from Donegal County Council have since been dissolved.

There were eight Boards of Guardians, in existence since the early 1840s, in Ballyshannon, Inishowen (Carndonagh), Stranorlar, Milford, Donegal, Glenties, Dunfanaghy and Letterkenny. The Guardians oversaw the running of the eight workhouses in the county.

All the surviving minutes contain historical information regarding the development of different parts of the county at a critical time in our national history. The 1916 Minutes include resolutions made by Councils and authorities in response to the 1916 Rising and to martial law and imprisonment of those involved in the Rising in the following months.

The minutes make reference to the ever evolving political situation at the time across the country, north and south, throughout the year. The minutes provide a fascinating insight into the initial and sometimes changing viewpoints and stances taken by local political figures in County Donegal in response to the national crisis and the gradual movement towards independence.

As part of Donegal County Council’s 1916 Centenary Programme, the Archives Service has digitised the 1916 minutes of meetings of its predecessor bodies and those that survive for the Council itself. The digitisation work itself was completed in 2016 by Mallon Technology Ltd for Donegal County Council and part funded by the State Centenary Programme’s Commemorative Grant Scheme. The archived minutes are now being gradually placed online for viewing and are available at www.donegalcoco.ie

County Archivist, Niamh Brennan, reminded attendees at the launch about how fortunate Donegal was to have so many surviving and varying local authority records. Unfortunately, Donegal County Council itself only has the minutes for January and February 1916.

The archivist requested that any known copies of the County Council minutes from March to December 1916 that may be held elsewhere be donated or copies given to the County Archives to add to the Collection for preservation and for access.

Check out the 1916 council minutes in digital format was last modified: May 5th, 2017 by Stephen Maguire
Facebook0Tweet0LinkedIn0Print0