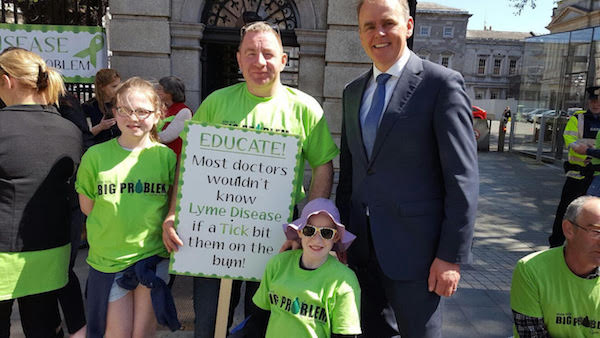 written by Stephen Maguire May 6, 2017
FacebookTweetLinkedInPrint

DONEGAL TD Joe McHugh has called for a Government review of how Lyme Disease sufferers are treated by the health services.

Minister McHugh met with campaigners from Donegal at Leinster House this week.

The Fine Gael Government TD has also written to Health Minister Simon Harris to ask that all medications for Lyme Disease sufferers are covered by the Medical Card and/or covered in the prescription payment scheme.

Among those McHugh met was Carndonagh man Charlie Harkin.

Said Minister McHugh: “Like many sufferers Charlie currently has to pay for immunity boosters and other supplements out of his own pocket.

“I believe this is unfair. I have been in contact with doctors who are experts in the treatment of the illness and they recommend the use of these supplements.

“I have asked Minister Harris and his officials to examine a way of covering the costs of these supplements.

“I want to pay tribute to Charlie and others in Donegal and throughout the country for their campaign thus far and I want to assure them of my support.”
Minister McHugh said he also supports the campaign to make diagnosis of the illness easier, with many people waiting years before a final diagnosis is given.

“I know the HSE does run annual information campaigns on how to avoid getting Lyme Disease but I believe we need to go further, not just in prevention measures but in the treatment and diagnosis of those like Charlie who have been diagnosed with the illness,” said McHugh.

“I am concerned too at how long it can take for a diagnosis with the case of a young woman from Gortahork who became ill in 2010 and had been cleared of having the illness several times before a diagnosis from a health centre in Germany.”

Lyme disease is an uncommon infection spread by an infected biting tick.

Ramblers, campers, mountain bikers, and others who work and walk in forested or grassy areas must be vigilant against tick bites.

The ticks are tiny spider like creatures that feed on the blood of mammals and birds and will also feed on the blood of humans and occasionally dogs. Ticks are more numerous and more active in the summer months and protecting against tick bites protects against Lyme disease.

Tick bites can be prevented by:

· Wearing long trousers, long sleeved shirt and shoes
· Using an insect repellent, such as DEET (but use a low-strength DEET if you are pregnant – your local pharmacist can advise you)
· Checking skin, hair and warm skin folds (especially the neck and scalp of children) for ticks, after a day out
· Removing any ticks and consulting with a GP if symptoms develop
· If you have been walking your dog, check him/her too
If you find a tick, remove it – consult your GP if symptoms develop.

Ticks generally have to be attached to a person for a number of hours before passing on the infection, so rapid removal of ticks is important. If a tick is removed within a few hours, the risk of infection is low.

Lyme disease has been notifiable in Ireland since 2012 and since then, there have been between eight and 18 cases officially notified in Ireland each year.

However Minister McHugh added: “It’s possible that there are many more, perhaps 60 people a year, because of the delays in diagnosis.”