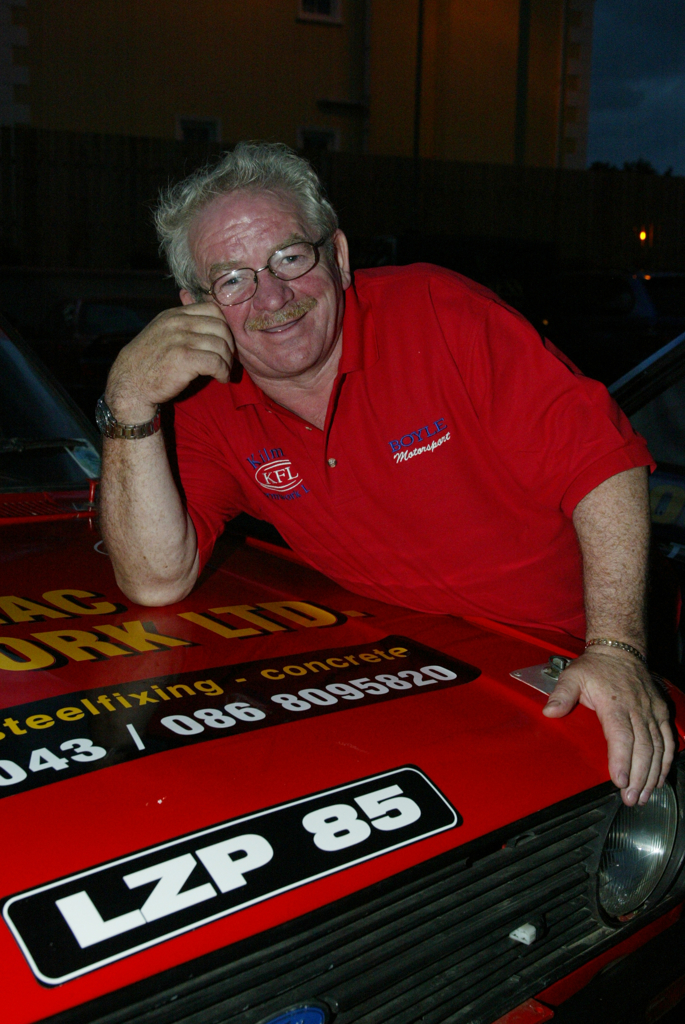 written by Brian McDaid May 11, 2017
Facebook0Tweet0LinkedIn0Print0

This week a Donegal registered Ford Escort Mk2 has found its way onto my motoring column for the second time in its 40 year history.

Henry Ford may have made this two door version but the car’s passion was added up here in Co. Donegal. Up here we are different, we have one of the finest stages in the world in the Donegal International Rally in June, a place where we all can compete together. This car made its way on to the start ramp of the Donegal Rally in many different colours and many different stages of development over the years. Sadly its creator is no longer with us and his memory at this time of year is too much to bear, that the rally weekend in June is not the same anymore for some. 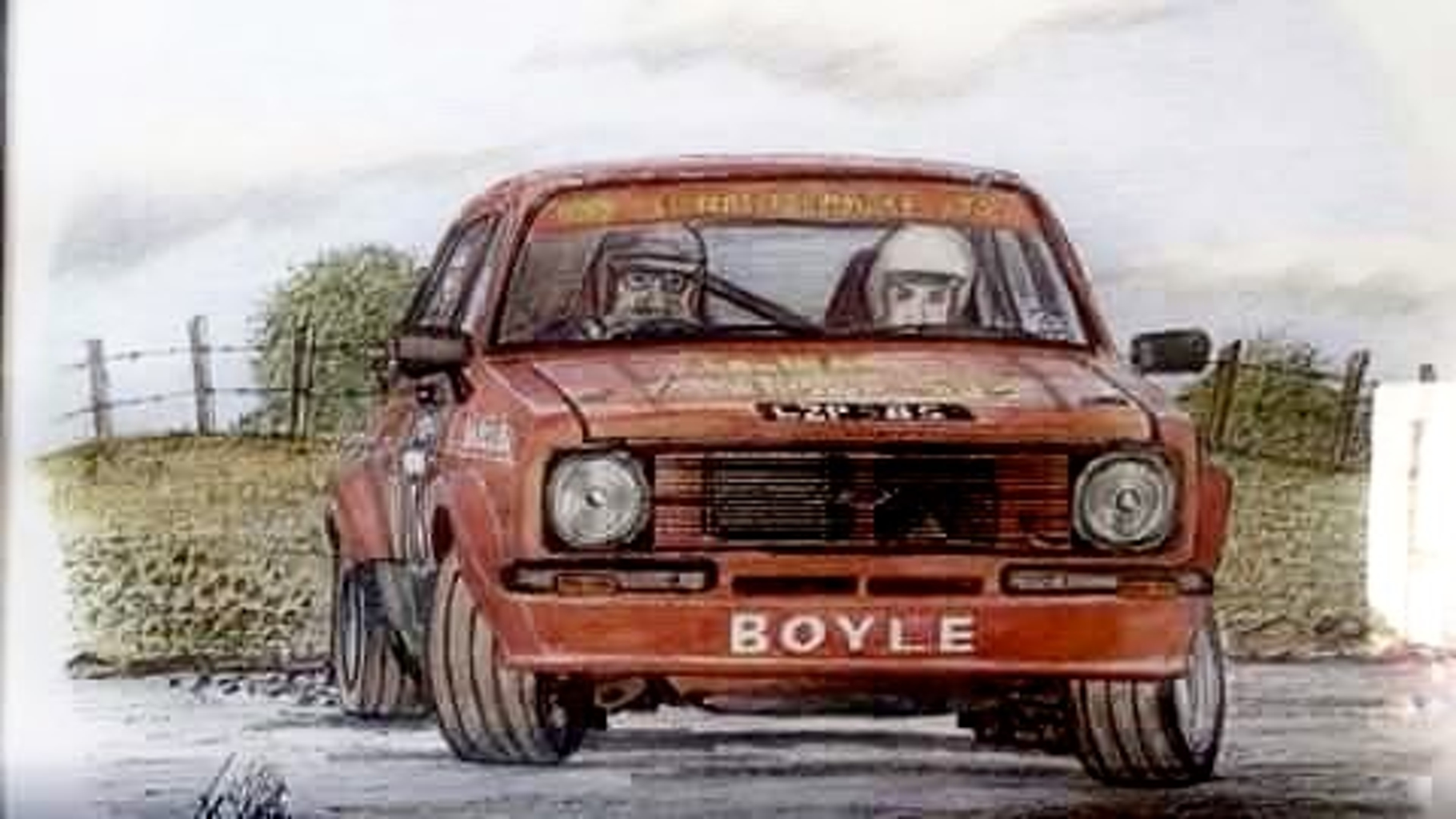 A painting that Sharon has of her Dad’s famous Ford Escort and her and father John on the Donegal rally.

“Life is for living, we can rest when we sleep in heaven”

On the June 4th Sharon Clarke, a mother of three will take part in her first ever marathon. She has pushed herself to do this with the help of her family and friends. She is doing this to remember her father, John Boyle on his tenth Anniversary. John Boyle was one of Donegal’s best known and respected members of the Donegal Motor Club and was only 55 years of age when he passed away after a long battle with cancer. He was cared for on his final journey through life at the Donegal Hospice in Letterkenny.

By a way of saying thank you to all the staff that helped in any way, Sharon his daughter is hoping to raise funds for the Donegal Hospice through her attempt at her first ever marathon in Derry on the 4th of June.

Sharon’s memory of her father John in her own words;

“My father John was one of the most fun loving and adrenaline seeking people that I have ever known. His motto in life was “life is for living, we can rest when we sleep in heaven” and this was how he lived, through his work ethic and social life. He worked hard and played hard. His biggest passion in life after his family was his love for rallying. Much to my sadness I have found it too difficult to continue my love for the sport. It brings back too many beautiful memories that unfortunately have my father in them all.

“When sitting one evening with my friends, I suggested that I would love to do something fun for dad’s tenth Anniversary. A few suggestions arose like a parachute jump or drive a rally car , which I have all completed in the past thanks to my dad. One of my girls suggested what about running a marathon and I was like, sure I have never ran before.

“After talking it over with my cousin Lynn, she convinced me that I could do it, if I really wanted too. Lynn said “sure you have a year now to get ready for it”; start with the couch to 5K and work up from there. So with the encouragement from my family and friends I decided to run the Walled City Marathon in Derry. I have been so lucky that a close family friend Ciaran Callaghan from Drumoghill said that he would join me by becoming my training partner. I was so delighted when he also agreed to run the 26.2 miles with me on the 4th June in Derry.” 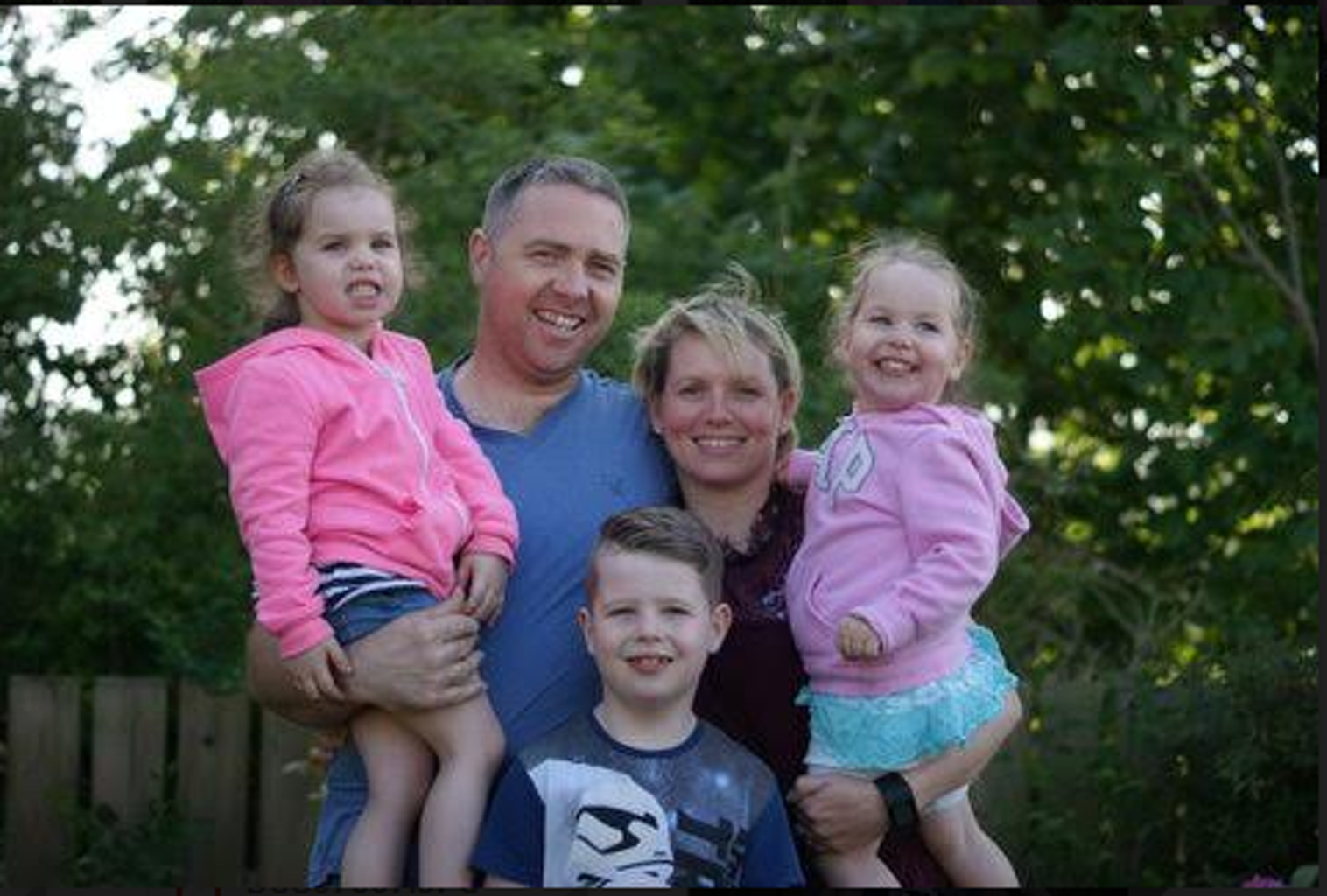 Sharon Clarke with her husband Andrew and children Una, Ella and Dean, as she prepares for the marathon in memory of his father John Photo by Terese Duffy

Sharon is 36 and married to Andrew, they have 3 young children, Dean 7, Ella 3 and Úna 2. Sharon’s father John passed away in the Donegal Hospice on the 15th July 2007 and with the Donegal Rally always in June. This is always an emotional time but doing something this year on his tenth anniversary the memory might ease the pain of loss a little.

Sharon is hoping that she might get the number 85 for her entry for the Marathon as that was the number her father’s car was in the days of the rally.

Our picture show Sharon and her father in happier days rallying but hopefully these memories will drive the girl from Manor over the finish line in the maiden city on the 4th of June. 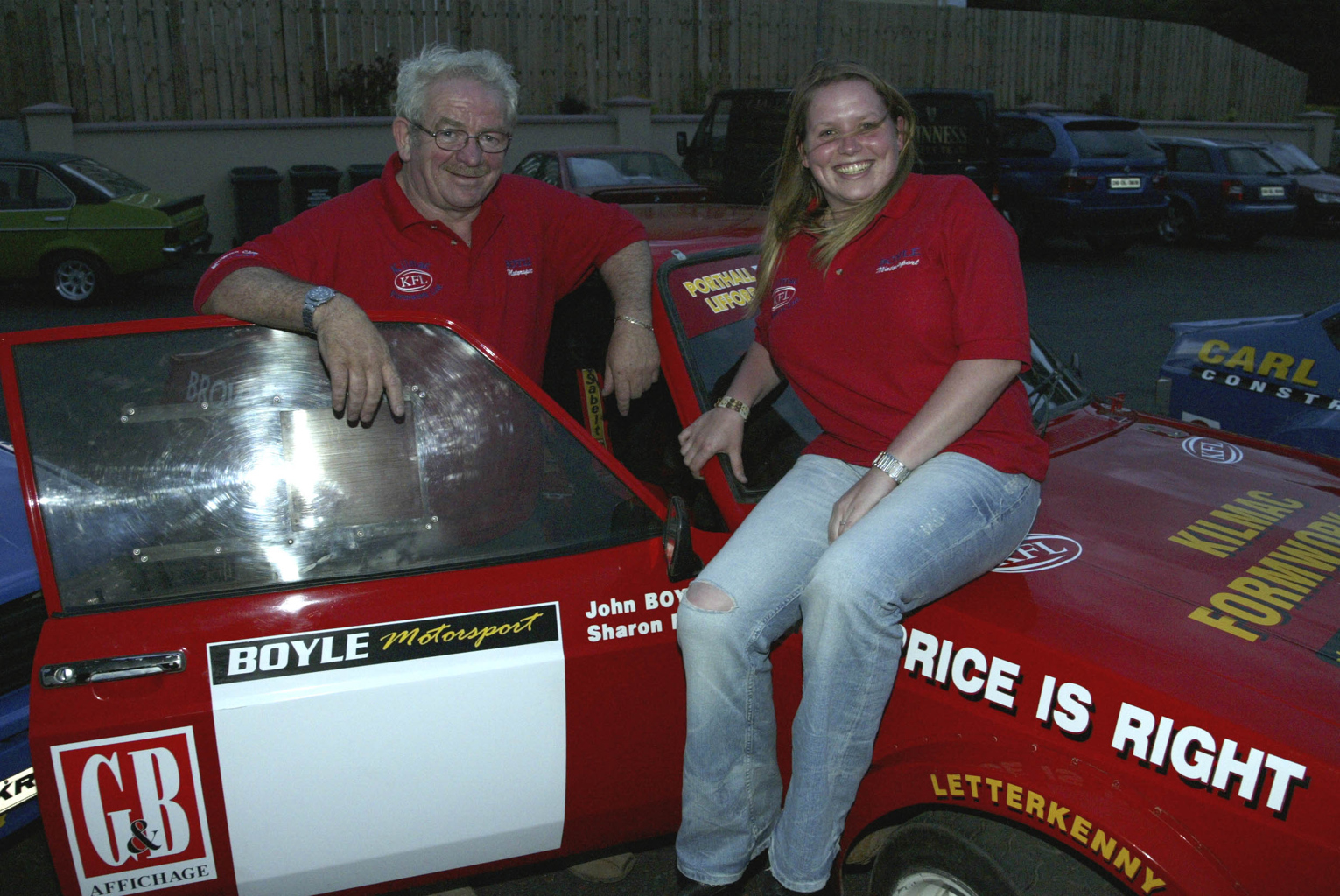 For anyone who didn’t know John Boyle, this is the way I described him just before his death, just over ten years ago when I interviewed John in 2006 on the run up to the Donegal International rally.

John Boyle’s personality was infectious to all that he met. I met John many times over the years, I even met him in the middle of the Manor Roundabout one night when I misjudged my braking, John spotted me and landed back with a rope and gave me a pull out. I never told anyone about this until I was asked by his daughter to give her a hand with this piece this week. That gesture of help that night from her father John just sums him up so well.

This was a piece I wrote about John Boyle when I last met him around this time of year on the run up to the Donegal Rally, He was fighting his illness at the time but was trying to enjoy life as much as that was possible.

“It’s 1978, and we are in the road tax office in Lifford. A dark curly-haired man lines up in the queue. In those days everyone had to head to Lifford to get their car taxed. A complete set of documents in the right order were the only way to secure a tax disc for the windscreen. As our dark stranger approached the counter he stooped down so he had direct eye contact with the counter staff through the small circular hole in the glass screen. The hole wasn’t much bigger than the round tax disc he hoped to secure from the assistant.

“Hello there” he said politely as he turned on his best Lagan charm. The larger than life dark stranger talked with such a gentle voice as he explained the details of his “wee car” as a new brown tax book was brought to the counter and the assistance started to fill it out. A double punch from the stamper lifted enough ink to dent the tax book for LZP 85 and the rest is history.

Thirty-eight years on and that red MkII Ford Escort, LZP 85 still belongs to that curly haired man, now his hair is more a metallic silver shade of black. His escort has been around for over thirsty five years, but it was not his first rally car.

John Boyle’s first rally car was an ex Russell Brookes Mk1 Escort Mexico which he bought for 1,150 English pounds. He competed in the Donegal Rally in 1973 with co-driver John Mc Cafferty from Termon. That year John’s main sponsor was the Ford Dealer in Letterkenny, McClean & McLaughlin. Then in 1978 the year that he purchased LZP 85 which had parts of the old ex works Russell Brookes car fitted he competed in the Donegal International but retired with clutch problems on the Saturday. That year the rally was won by another great famous Mk2 Escort in the hands of Ari Vatenan.

The man in “our” famous Mk2 Escort was none other than John Boyle, from Manorcunnigham better known as “John Boyle O Manor”.

John, a panel beater by trade has had a long association with rallying in Co. Donegal, John was involved in the preparation of many of the top drivers cars in Donegal including double Donegal winner, James Cullen. Over the years John’s work in the motor-trade for the public and the motor-sport left him with little time to work on his own car, which always left him burning the mid-night-oil to get that escort ready for the road.

Now-a-days John has a different outlook on life, he has taken a step back from the fast lane as far as work is concerned and motor-sport is purely for enjoyment. LZP 85 has never looked better. The Donegal registered Escort is entered for this weekends event, John will do the steering and his daughter Sharon will do the navigating. This father and daughter team have had great success this year already in Killarney and also in a rally in France where they finished 4th over all in March.

John gets so much enjoyment from his rallying now-a-days. It also gives him a chance to meet with old friends as they recall the great days of the ‘Donegal’. On Friday morning car entered at No 135 will leave the start ramp in Letterkenny , John knows the roads like the back of his hand especially the old stages. John is looking forward to his journey through Donegal over this weekend.”

That was LZP 85 in 2006, it’s now eleven years on and John Boyle still burns in the memory of his daughter Sharon and in the rest of John’s family as the tenth anniversary of his passing approaches. His old Escort sat up for a long time until Sharon realised she never would feel the same behind the wheel of it anymore.

She accepted an offer on the car which now has started the possibilities of new beginnings with its new owner who lives in Australia. Sharon still has the old tax book that her father got for his own piece of engineering in 1978 which is a keepsake for her forever. Now she put the final touches on her journey through life as she remembers her father John when she heads to the start ramp in Derry on the 4th of June to compete in the marathon in Derry to raise much needed money for the Donegal Hospice.

Please feel happy to share this article along the with the link to Sharon’s fundraising page:
https://www.idonate.ie/fundraiser/11364678_sharon-clarke-s-fundraising-page.html