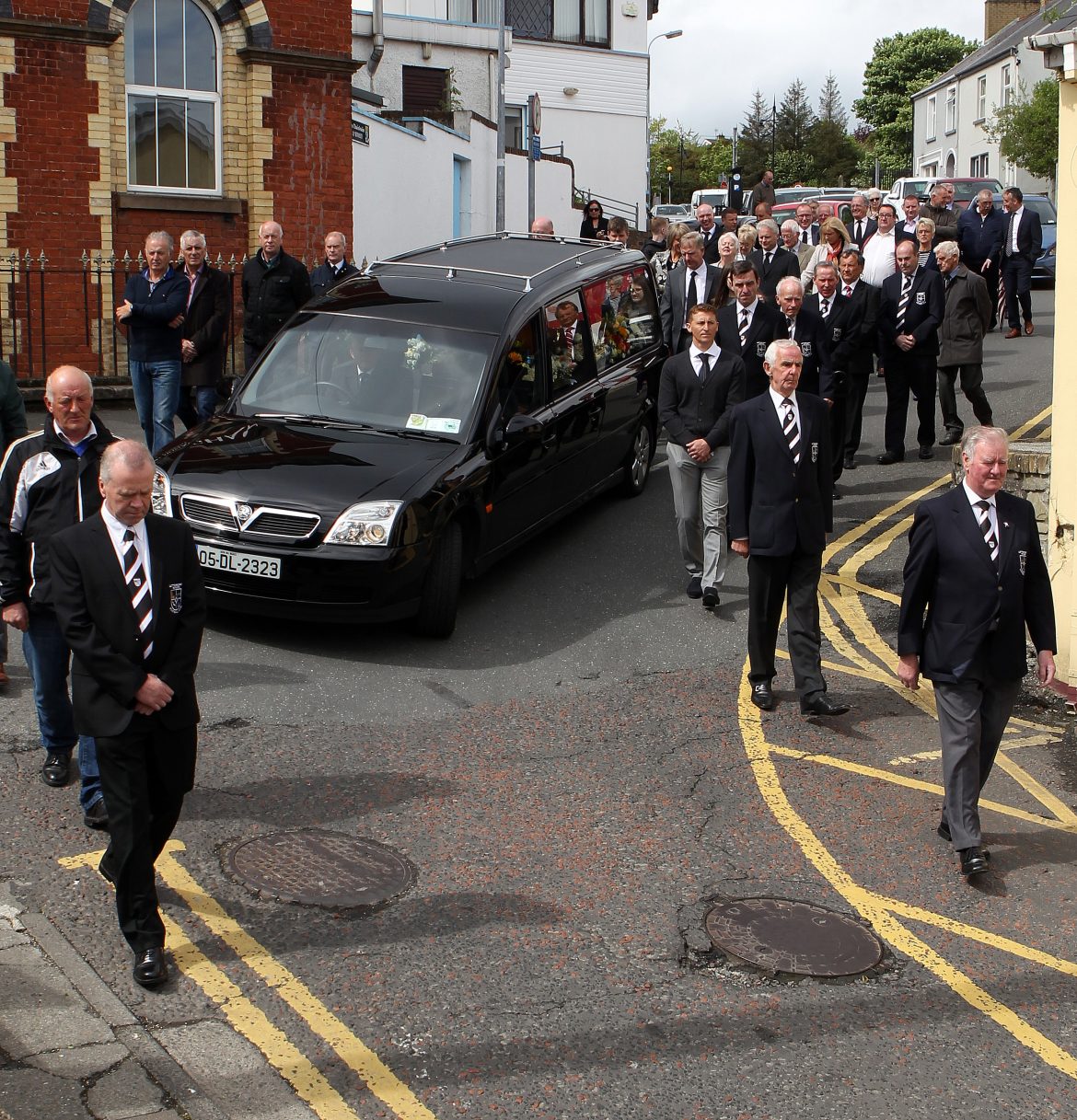 Eunan ‘Busty’ Blake: ‘A Letterkenny townie’ who graced some of football’s biggest theatres

written by Chris McNulty May 13, 2017
Facebook0Tweet0LinkedIn0Print0

Eunan ‘Busty’ Blake graced some of football’s grandest stages, but his heart always belonged to his native Letterkenny.

At his Funeral Mass this afternoon at St Eunan’s Cathedral, mourners heard Fr Daly speak of a ‘grand, decent man’ who slipped quietly to his rest on Wednesday last following a long battle with illness.

One of the great legends of Donegal soccer, Eunan Blake’s talents, according to those who played with him and those who toiled against him, belonged at the highest level.

He attracted attention from the likes of West Ham United, Nottingham Forest, Everton and Glasgow Rangers, but the rewards in those days of the early 1960s were a far cry from what they are in the present day. And so he stayed in Letterkenny, though his career took him to Derry City, Sligo Rovers, Finn Harps and Athlone Town.

“Busty was a great ambassador in so many ways for the town,” Fr Daly said.

“If football is played in Heaven, then God is now rubbing his hands. He now has a complete team, the last place taken by Busty, a grand and decent man.

“Busty was a cultured footballer. Busty made the game look simple and that is a sign of a good, true footballer – making it look simple.

“Busty graced many football fields. He gave a lot to Letterkenny Rovers and it was great to see them forming a guard of honour. He graduated to bigger stages and went on to play senior football here.

“He was a townie at heart – a Letterkenny town man through and through.”

The pieces of memorabilia resting at the Altar painted their own picture of a man whose career could have spanned any generation.

His grandchildren Matthew, David and Cian carried to the Altar a League of Ireland jersey, a Derry City jersey and a collage depicting his many achievements in football.

He had over 20 years in senior football and he won six inter-league caps for the League of Ireland team.

Eunan was assistant manager at Athlone Town in 1975 when they drew 0-0 with AC Milan at St Mel’s Park in the UEFA Cup and he was on a Derry City side that had European outings against Steaua Bucharest, FC Lyn and Anderlecht.

An honorary life member of his hometown club Letterkenny Rovers, he served at Leckview Park as a manager, player and volunteer.

Rovers club members formed a guard of honour, joined by other representatives from the football family and it was a fitting send off for a man who was, in January 2011, inducted into the Donegal Sports Star Awards’ Hall of Fame in recognition of his stellar career.

In recent months, Eunan was predeceased by his brother Harry and his sister Eileen and behind the football there was a family man and a gentleman.

“He had a strong sense of serenity, he was extremely friendly and had a huge sense of fair play to all – even on the football field,” Fr Daly, joined in celebrating Mass by Fr Kelly and Fr McMenamin.

“He did everything fairly.  He had a friendly, courteous personality. He was a religious man, not the in-your-face type, but he was a solid, consistent follower of God. He carried his Rosary beads with him at all times.”

Eunan ‘Busty’ Blake is survived by his wife Katie, his daughters Brenda and Karen, sons Gary and Tony, brother Liam and sisters Rosie and Mary.