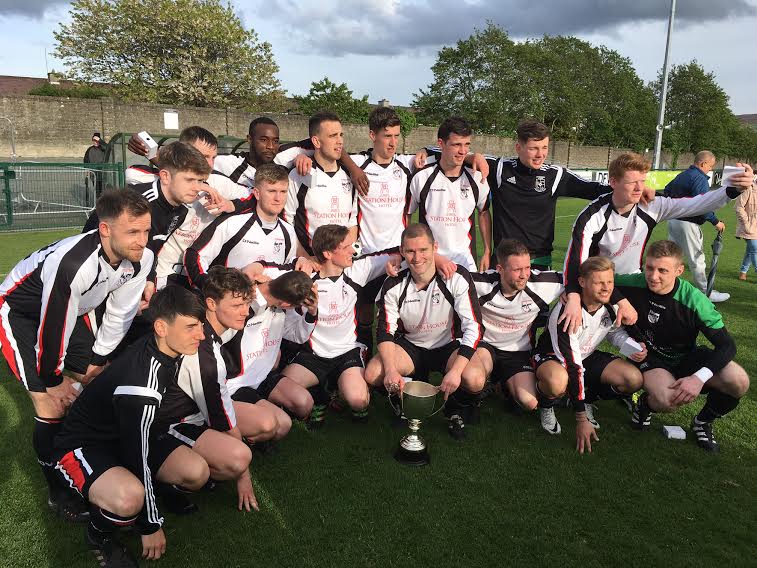 Goals by the McVeigh brothers, Brian and Paul, and another from Steve Okakpo-Emeka gave Letterkenny Rovers a comprehensive win over Glengad United in the Knockalla Caravans Senior Cup final at Maginn Park this evening.

By Charlie Collins at Maginn Park

The McVeigh boys came to haunt their colleges manager, Shane Byrne, as Rovers captured the silverware thanks to an impressive second-half performance.

Byrne manages the Letterkenny Institute of Technology team that contains the McVeighs and it was their brace of goals in a deadly two-minute spell that sank Glengad.

Brian McVeigh opened the scoring in the 58th minute. Okakpo-Emeka’s shot was only partially blocked and Kevin McGrath laid it back to McVeigh who, from just outside the box, calmly passed the ball into the net.

Okakpo-Emeka was involved again. This time, he and Brian McVeigh carved the opening down the right and it was the latter’s pin-point cross that picked out Paul McVeigh, whose superb header rose high into the net.

Late in the evening, Okakpo-Emeka finished the rout as he took a fine first touch and an even better second to drill past Kevin McLaughlin.

Rovers were pipped to the Ulster Senior League title by Cockhill having hit a rich vein of form since Christmas, when they looked to be out of the title race.

Last year’s beaten FAI Intermediate Cup finalists were desperate for a first trophy since winning this Cup in 2015 – and they did so thanks to a superb display after the break.

Lee Toland clipped the crossbar with a free kick before they grabbed the opening goal and it was no more than they’d deserved against a Glengad side that just couldn’t click into the high gears.

Glengad have dominated the Inishowen League’s domestic trophy race in the last three seasons and recently captured the League title for a third successive campaign.

Shane Byrne’s team had lost Knockalla finals to Swilly Rovers (2013) and Cockhill Celtic (2016) in recent years but a semi-final win over holders Cockhill at The Crua meant they arrived in Maginn Park with a spring in their step.

But it was Letterkenny who started with the greater purpose and the Cathedral town side looked set to open the scoring in the 30th minute, but a brilliant block by John Gerard McLaughlin kept the stalemate intact.

The Glengad captain threw himself at the mercy of Paul McVeigh’s close-range shot. McVeigh seemed certain to rattle the net, but McLaughlin intervened just in the nick of time after Darren McElwaine headed across the six-yard box.

That came just after Kevin McLaughlin had clawed away a shot from Okakpo-Emeka, who was set up by a clever first-touch from captain McElwaine.

The Rovers skipper volleyed wide soon after after taking a pass from McVeigh, who tested McLaughlin in the early moments with a decent try after cutting in from the left.

Glengad’s best moment of the early stages was a cross-cum-shot from Paddy McDermott that dropped just over Rory Kelly’s crossbar.

With half-time approaching, Glengad threw a shot across the Rovers brow, but James McKinney had more time than he thought and snatched an effort well wide after Terence Doherty squared to him in a great position.

Glengad could have pulled one back, but Nigel McMonagle couldn’t get his shot on target from a good position and it was Rovers who, deservedly, were spraying the champagne.