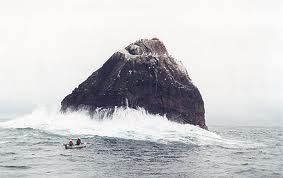 Documents show British feared island off Donegal could be spy base

The British Government feared that a large rock off the Donegal coast could be used as a spy base 60 years ago, according to declassified documents just released.

Concerns that Rockall could be used to spy on the Scottish military testing site, Hebrides Rocket Range, spurred the British to claim the territory.

A small team of military personnel were taken to Rockall in September 1955, where they raised a Union Jack and installed a plaque on the rock, the BBC reported.

“The island of Rockall was uninhabited but this government wished to guard against the possibility of hostile agents installing themselves on the island in order to observe the effects of the tests on the South Uist range.”

Rockall is an eroded volcano that stands 30m wide and 21m high above sea level.

It is 230 nautical miles north of Donegal and has long been the subject of ownership disputes.

Ownership of Rockall’s nearby fisheries and the oil-rich sea-bed has been contested by Ireland, the UK, Iceland and Denmark.

The dispute was finally settled in 2014, granting sovereignty to Scotland.

Documents show British feared island off Donegal could be spy base was last modified: May 17th, 2017 by Stephen Maguire