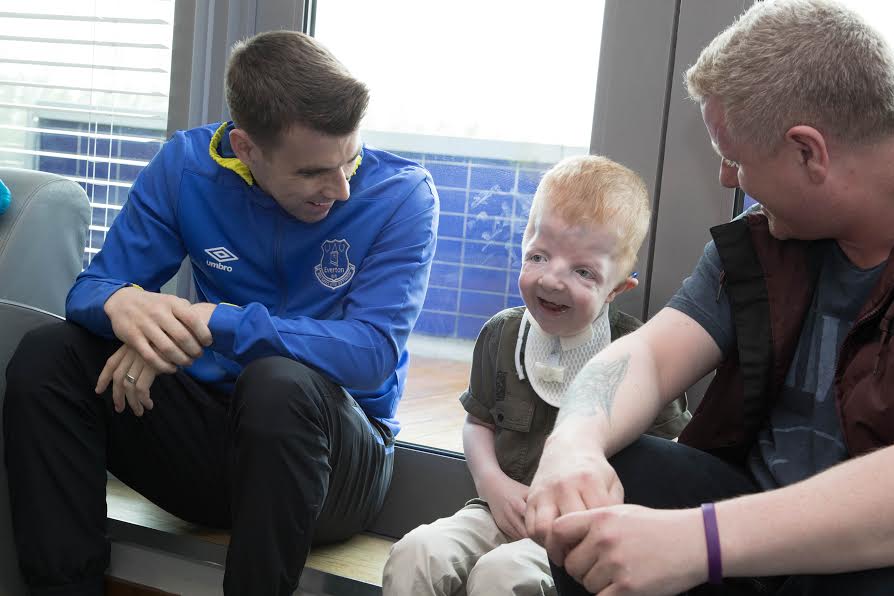 written by Chris McNulty May 17, 2017
FacebookTweetLinkedInPrint

A young Evertonian whose fundraising campaign was boosted by Blues defender Seamus Coleman saw his dream come true last Friday when he travelled over from Northern Ireland to pay his first ever visit to Goodison Park.

Daire Flanagan’s story caught the attention of hundreds of people on social media when Ciaran Rogan, a member of Everton’s Irish Supporters’ Club, launched a campaign to help give the youngster his trip of a lifetime.

The seven-year-old was born with Apert Syndrome, a genetic condition characterised by the premature fusion of certain skull bones that, due to the care Daire requires, makes overseas travel difficult.

However, Coleman donated £5,000 to help ensure the journey to Merseyside could go ahead and invited the youngster to meet him at USM Finch Farm before Friday’s victory over Watford.

Daire was later introduced to the rest of the first-team players in the Goodison tunnel, before walking out on to the pitch ahead of kick-off with skipper Phil Jagielka.

“I got involved with Daire about a year ago and it’s great to finally see him get over, because I know it wasn’t easy for the family to do,” said Coleman. “I knew they were trying to raise some money and when footballers get involved in donating money, it kind of raises the publicity of it all.

“That’s what I did, more people got involved and Daire’s dream came true. That makes me happy because that’s what life’s all about – living your dreams – and I’m sure it makes Daire and his family very happy as well.

“Like I said, I was a very, very small part in making that happen. There’s been a lot of people helping Daire along the way – his mum and dad and some of the organisers have been great.”

On a day he will never forget, Daire was also given a signed Everton shirt and pair of Coleman’s boots, as well as goalkeeper Joel Robles’ gloves.

“I woke up one morning and I had a text message from Seamus saying he’d seen the page and had donated £5,000 to get Daire over,” said Ciaran Rogan.

“I was starstruck and actually broke down in tears at the time. I was so happy that he had done that because it has made this dream possible for the young lad.

“He’s a bubbly personality, he’s a great kid and he deserves this trip. You could see the smile on his face, he was so happy to be at Goodison and it’s all because of Seamus that we could get here.”