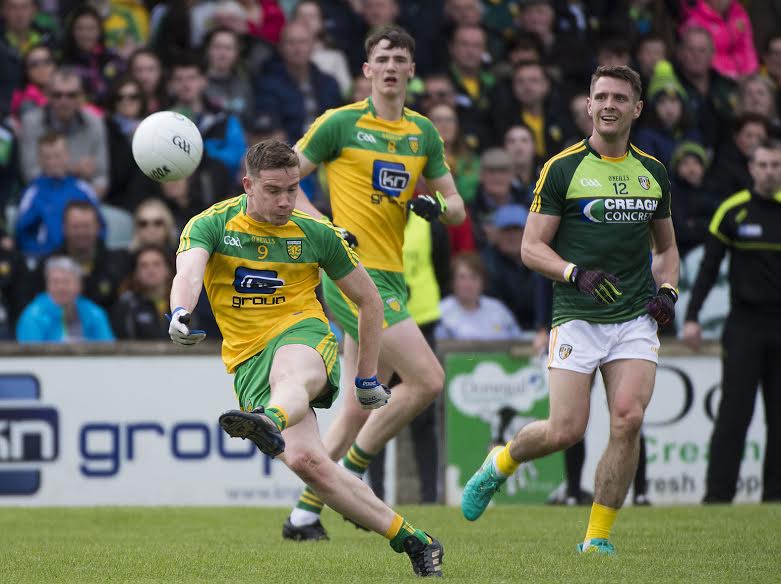 written by Chris McNulty May 21, 2017
FacebookTweetLinkedInPrint

Donegal had 16 points to spare as Rory Gallagher’s team cruised into the Ulster SFC semi-finals with a routine rout over Antrim at Sean MacCumhaill Park this afternoon.

Jamie Brennan, Paddy McGrath and Patrick McBrearty netted the goals as Donegal book a comfortable passage into a semi-final against Derry or Tyrone.

Championship debutant Brennan bagged the first goal in the 31st minute and it was a score that broke any resistance that the Saffrons – who saw two goal chances spurned beforehand – might have had.

Antrim’s Conor Small scored a goal with the last act of the game, but by then they were headed for the qualifiers and Donegal were in champagne mode.

Corner-back McGrath had scored just two points for Donegal before today but he slotted in a 62nd minute goal after a sweeping move involving Jason McGee, Martin McElhinney and Ryan McHugh.

In added time at the end, McBrearty – who didn’t start this afternoon – blasted home after being played in by McElhinney.

Bundoran’s Brennan was one of five players making their Ulster Championship debutants and got on the end of a give-and-go between Michael Murphy and Micheál Carroll before finishing in style.

The goal came just a minute after Matthew Fitzpatrick – cleared of a proposed 48-week ban during the week – prodded wide of the Donegal goal.

Earlier in the first half, CJ McGourty was in a similar position but he too rolled wide of Mark Anthony McGinley’s left post.

They were big chances for Antrim and they got a lesson in how to make the most of things when Brennan hammered home and Donegal were never in danger of letting a five-point advantage slip.

Murphy hit three points in three minutes, including one with an outrageous swing of the right boot from beyond 45 metres, as Donegal won without having to hit anything near the high notes as the game took on something of a challenge feel to it in the second half in front of 10,083 in Ballybofey.

The winds of change swept through the Bluestacks in the winter with nine of the 2016 panel stepping away from inter-county duty.

Donegal lined out with five Championship debutants and with seven of their starting XV starting a Senior Championship contest for the first time.

Caolan Ward, Jason McGee, Carroll, Cian Mulligan and Brennan were given their first tastes of Championship fare and Eoghan Ban Gallagher and Ciaran Thompson got their rewards for fine League campaigns, with inclusion in a Donegal team that showed only McGrath, Neil McGee, McGlynn and Murphy from the 2012 All-Ireland final.

Mulligan hadn’t been named to start in the Donegal team released yesterday, but he came into the equation to take the place of McBrearty, in what had been a rumoured change late in the week.

Antrim might well have had a goal in the 20th minute but McGourty, after collecting a glorious diagonal pass in from Paddy McBride, beat Mark Anthony McGinley, only to see his shot roll inches wide.

They had another big goal chance 11 minutes later when, from an almost identical move, Conor Hamill found Fitzpatrick but, after a wonderful swivel, he fired similarly off target to McGourty.

Fitzpatrick hit the headlines this week when he was given a proposed 48-week ban, only to see the suspension quashed on an appeal, at which he was represented by Barrister and GAA pundit Joe Brolly. Fitzpatrick’s afternoon has ended prematurely, though, as he left on a stretcher in added time at the end of the half.

Within a minute, Brennan was away in celebration and Donegal had their number.

Antrim came here eight years ago and stunned the John Joe Doherty-managed Donegal when they scored a famous win, but Donegal have been one of the dominant forces in the Ulster SFC in recent years, reaching the last six finals (winning three).

The League campaigns of both had been contrasting with Donegal mixing well in Division 1 and Antrim falling through the trapdoor into Division 4.

McGourty’s granny Harbinson hails from Ballybofey and he was central to proceedings with three frees as Antrim began well, but a brace of frees each by Thompson and Murphy, as well as a lovely effort from play by Thompson gave Donegal the edge.

Hugh McFadden boomed over from the stand side just after McGourty’s goal chance and when Fitzpatrick spurned their next big opening Brennan delivered an emphatic response – and Donegal could book the bus to a semi-final next month.

Antrim, in the 26th minute, were just a point behind at 0-7 to 0-6, but thereafter it was one-way traffic as Donegal march on with their bench contributing a handsome 1-6, including McBrearty’s 1-2 and two glorious points from Michael Langan, another who was appearing on this stage for the first time.

Derry or Tyrone – who play next Sunday at Celtic Park – will provide the opposition in a June 18 semi-final.