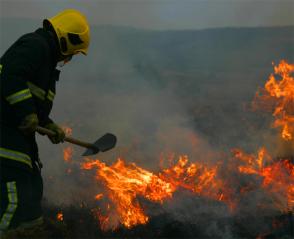 Innocent victims of illegal burning should not incur penalties – McCOnalogue

written by Stephen Maguire May 22, 2017
Facebook0Tweet0LinkedIn0Print0

Deputy Charlie McConalogue has called on Minister Doyle to give a commitment that innocent victims of illegal burning will not incur penalties to their farm payments.

He made the comments following the recent spate of forest fires, which caused substantial damage to land and habitats.

Deputy McConalogue said he fully believes that anyone who is found to have illegally started fires on their land should face the full consequences of their actions.

However, he said he has been contacted by many concerned farmers who are afraid that they will incur penalties to their 2017 BPS payment as a result of fires that were illegally started on other farms and which spread to their land.

He said “The Department has warned farmers that anyone found to have started fires on their land illegally may see penalties applied to their 2017 BPS payment, however there are real concerns that innocent farmers who are victims of illegal burning could also be punished. This is neither fair nor proportionate and I am calling on Minister Doyle to clarify the issue”.