written by Rachel McLaughlin May 24, 2017
Facebook0Tweet0LinkedIn0Print0

The 2017 event was held at the Finn Valley Centre in Stranorlar last Tuesday, Wednesday and Thursday. Over the 3 days 48 schools participated and 490 children took part in the 5th and 6th class boys and girls tournament.

This year, the 3 days were broken down to include small, medium and large schools throughout the entire county. Interest in this tournament was extremely high this year across the county.

On Tuesday, the children had a surprise visit from Patrick O’Donovan, TD, The Minister of State for Tourism and Sport and Joe McHugh, TD, Minister of State for the Diaspora and International Development. They came along to the Finn Valley Centre to watch these young girls and boys compete in this years tournament. 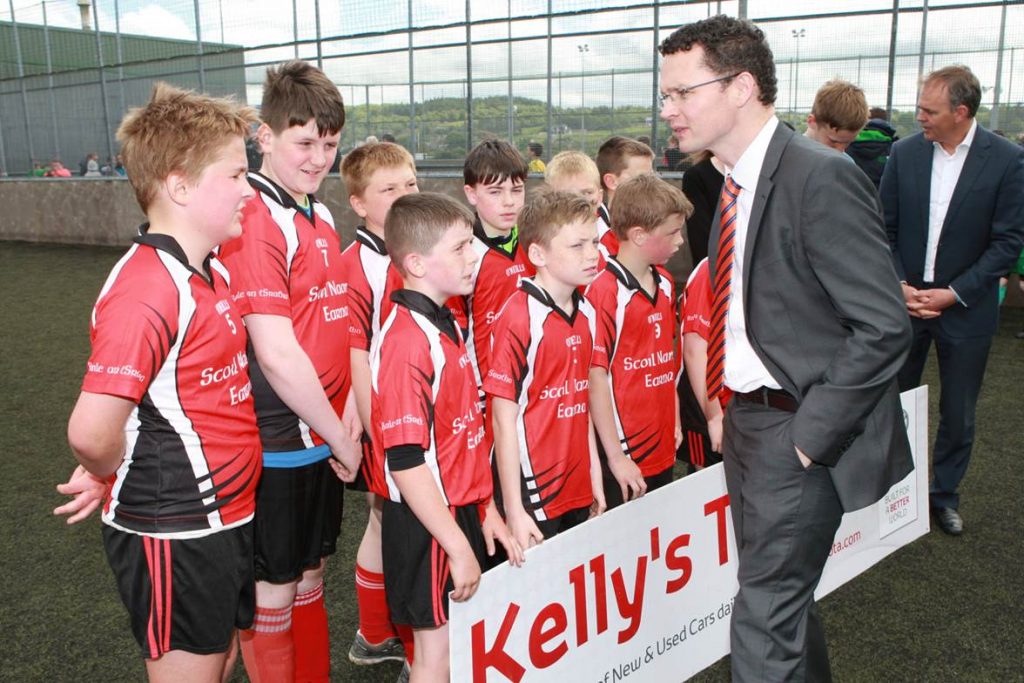 The visitors were impressed and mingled with the children and showed their support and encouraged the importance for them to participate in programmes like the Kelly’s Toyota Finn Harps Schools Programme.

Minister O’Donovan congratulated the organisers and the coaches of the programme, acknowledging that it is the only one of its kind in Ireland and he also acknowledged that this programme is unique in that it is an all inclusive programme for school children throughout Donegal, that may never have had the opportunity to access a programme like this previously. 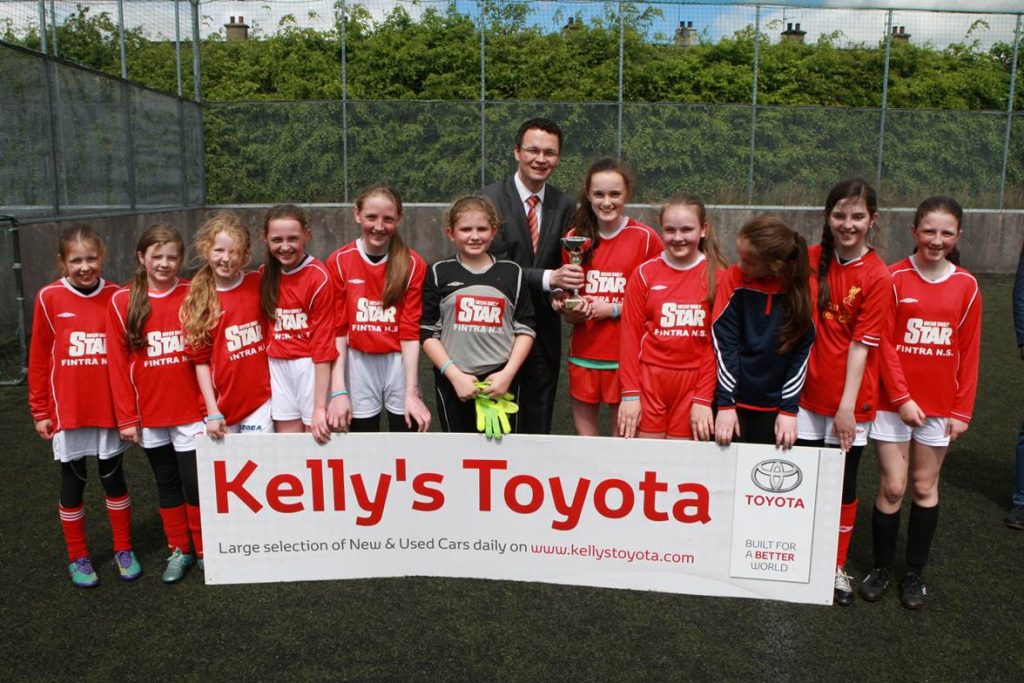 The Minister acknowledged the fact that in only 5 years the programme now provides personal development and coaching programmes to more than 6,000 primary school children through soccer and nutritional programmes in the county.

Both ministers stayed for the finals and were delighted to make the official presentations to the winning teams. They presented the boys from Glencovitt National School, Ballybofey and Fintra National School girls with their winning trophies. 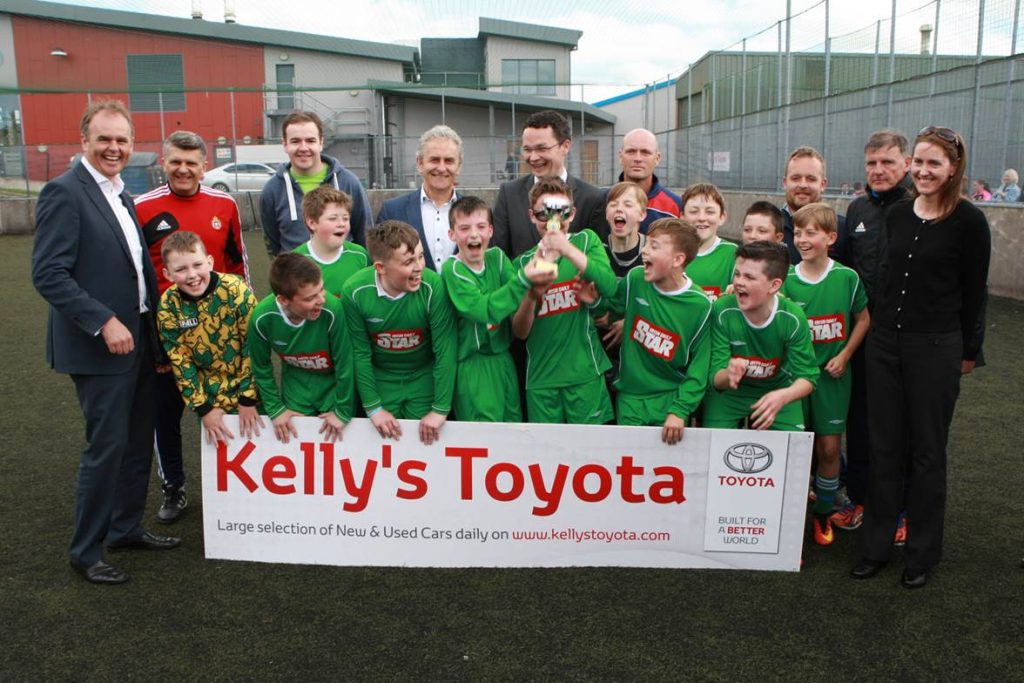 Speaking on behalf of the sponsors of the programme Brendan Kelly commented “We have been involved with the programme now entering its 3rd year. It provides our entire team great pride to see children from all skill levels receiving positive and rewarding experiences from the deliverance of this programme.

“To see respect and teamwork at each event throughout the school year from the organisers, coaches, schools, teachers, parents to the children who participate and enjoy the participation and that is what it’s all about for Kellys Toyota.”

“When you see children getting the chance to enjoy and take part in soccer coaching, competitions and tournaments, meeting celebrities, soccer players, attending Finn Harps games and international games through the FAI in the Aviva Stadium Dublin, that they would never have previously without this programme makes our involvement extremely worthwhile. 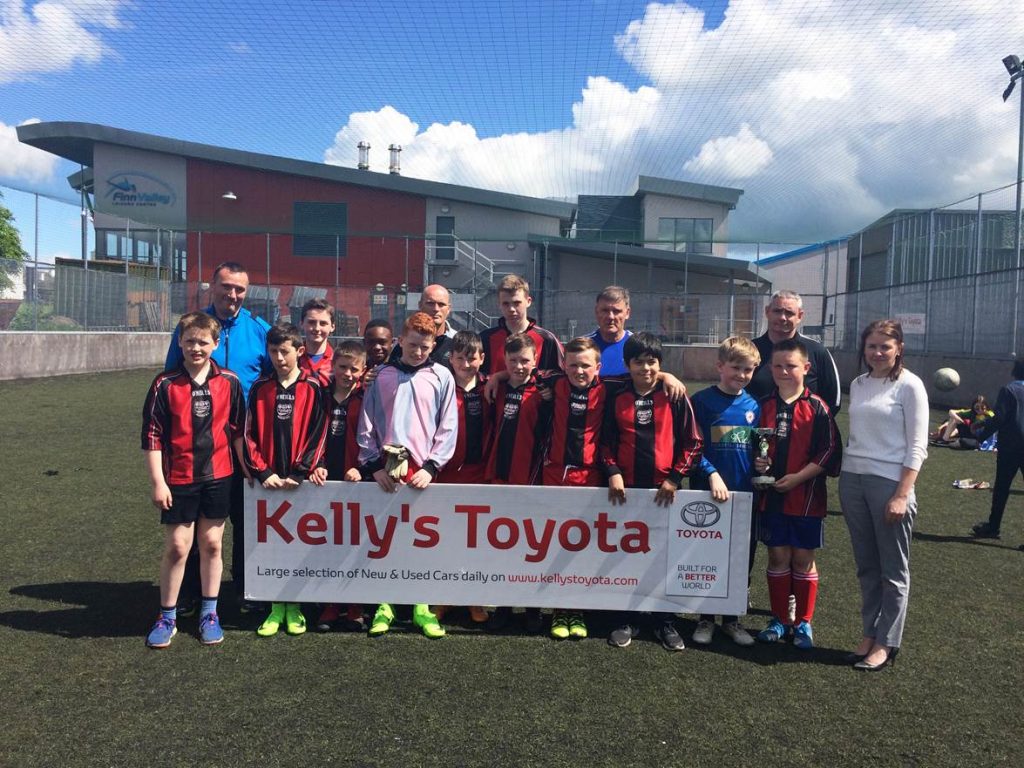 The programme provides safe, enjoyable recreation opportunities where each child has a positive, rewarding experience while learning the basic skills and fundamentals of soccer football regardless of skill level and where each child will learn the importance of sportsmanship, leadership, teamwork, respect, and integrity while sharing with their coaches and teammates the emotions of success and failure. 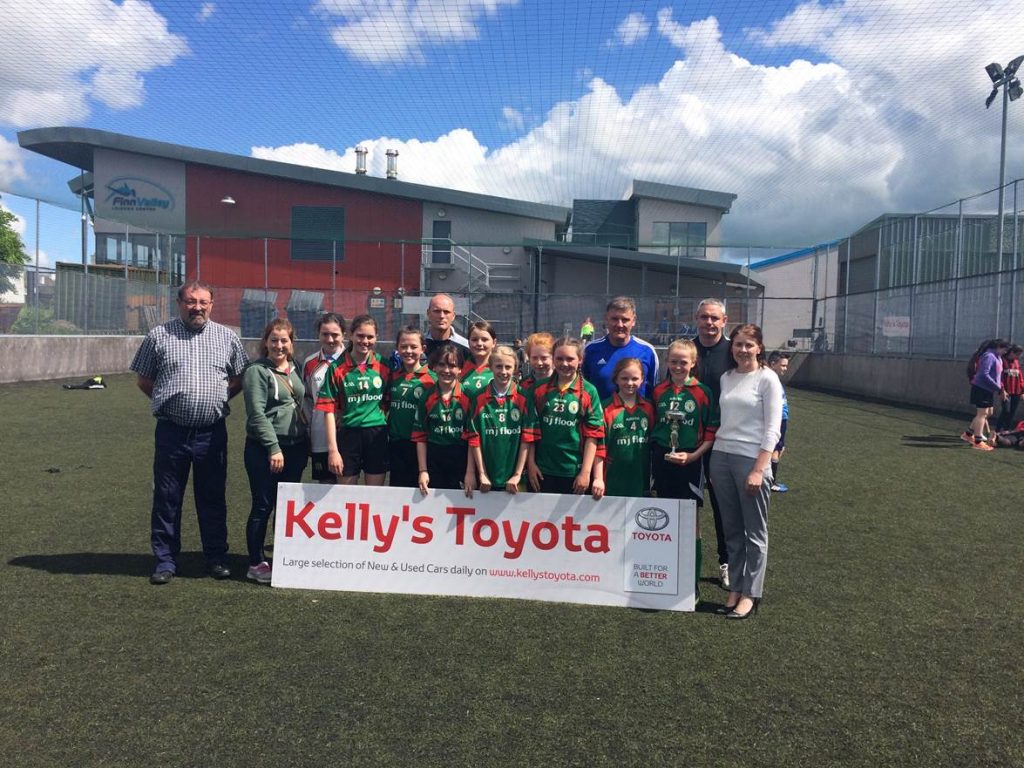 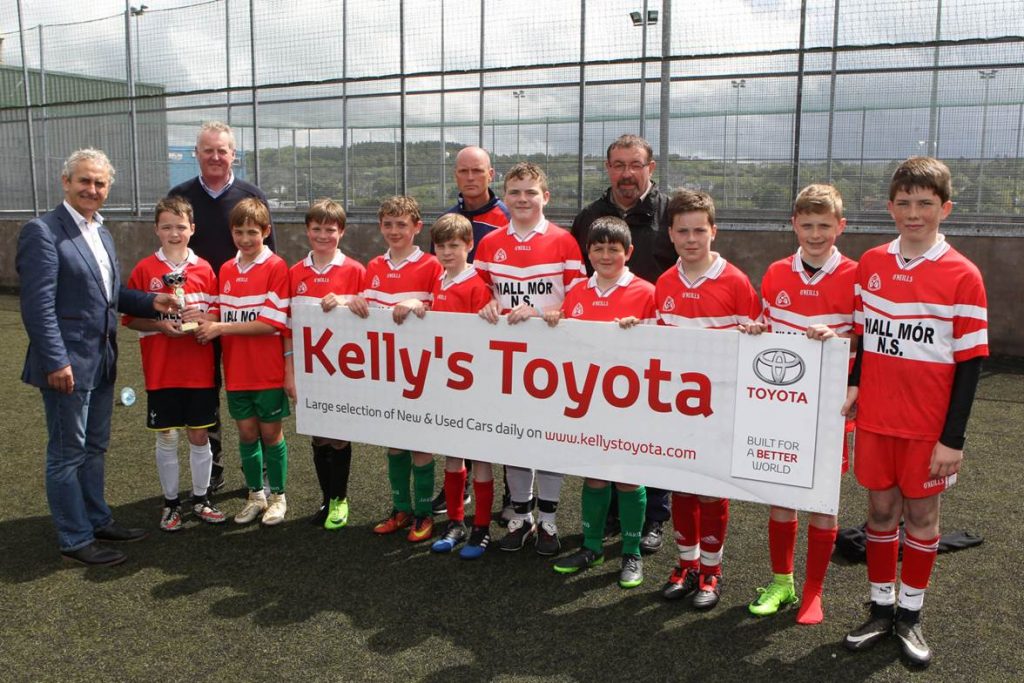 John Campbell, the programme secretary of the school coaching programmes and event organiser says, “I can’t believe that we are nearing an end to another successful Kelly’s Toyota Finn Harps Schools Programme for 2016/2017. It has been an outstanding year with the programme achieving new targets on all fronts. It has been one of the best years so far with record numbers taking part and the interest and feedback from teachers across schools in the county has been unbelievable.” 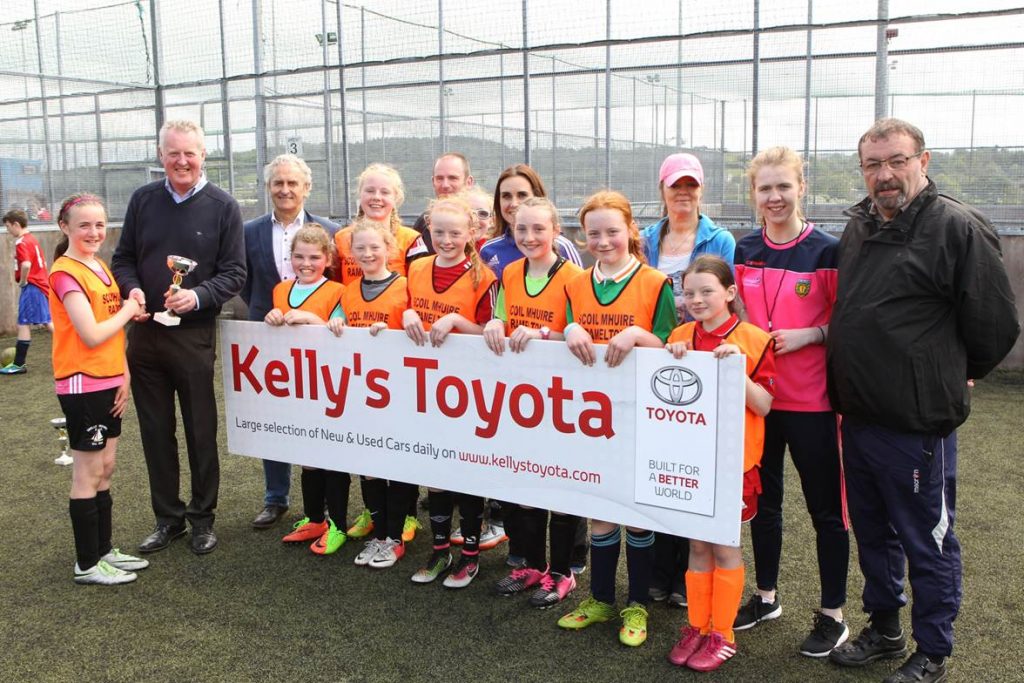 “I have to say that working with the team of coaches Michael O Dochartaigh, Paddy Gallagher, Keith Jones, Chantelle Grant, Dessie Mc Glinchey, Karl Mc Hugh and Stuart Connolly has been a pleasure working with all of these coaches and without their hard work, dedication and the experience that they put into delivering the programme and the coaching that they give to the children has been first class, a programme like this could not work without coaches like them.”

“I would like to to thank our sponsor, Brendan Kelly and his team at Kellys Toyota for their amazing support since our partnership was formed. I also want to thank the teachers, the pupils for their co-operation in the past year. I want to thank the Kelly’s Toyota Finn Harps School programme committee for their contribution, time and work. In particular, I want to thank Grace Ann Mc Garvey, PR and Marketing Consultant for giving her time freely and volunteering many hours of work on promoting and creating awareness of the programme.”

“I would also like to thank Brian O’Donnell from the Donegal Road Safety Working Group, whom we look forward to once again partnering on this programme next year when we will continue to help promote awareness of road safety to the Donegal primary School children,” concludes John Campbell.