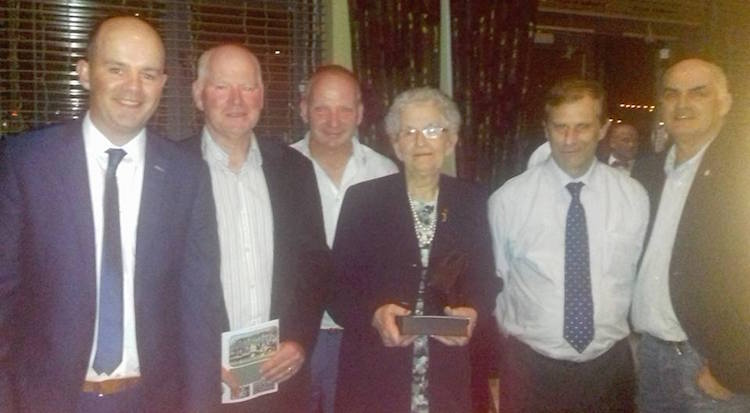 written by Chris McNulty May 25, 2017
FacebookTweetLinkedInPrint

There were times when Mary McAteer was the very definition of a one-woman club in Rathmullan.

The White Harte Bar in the seaside village was Rathmullan Celtic’s administrative office, changing rooms and social centre all in one and it was from there, in the family bar, that Mary ran the club.

She inherited a love of football – ‘soccer!’ she is quick to point out – from her father, who ran the Summer Cups in Rathmullan and her contribution to the club is unquantifiable it has been so vast.

On Saturday night, she was presented with a Lifetime Achievement Award at the Donegal League’s annual presentation night.

“I was always interested,” says Mary, 87 now and looking nothing near it. She is in Lourdes for a week now, but the heart and mind are never far from Rathmullan.

She says: “I was always involved with football in Rathmullan. I used to run the Summer Cups in Rathmullan with Patsy Sheridan, John Sheridan and John Todd. John did the line for us for years. he wasn’t able to get up for the dinner dance, but he’d loved to have been there.

“I got involved in the club when Rathmullan started off in the Donegal League.”

“There were some tough years,” she remembers.

“I’d write a cheque and poor Denis would be asking what it was for. I’d say back to him: ‘Dessie needs that cheque’ and that was how we were for years. I loved being involved though.”

If she has pride in how Ballyare turned out, there is a real glint in the eye when she thinks of how the landscape in Rathmullan is now and how Flagpole Field has been developed.

“To see how Rathmullan has developed is brilliant,” she says.

“We were deeply grateful in Rathmullan to Dr McDaid. That playing field wouldn’t be there only for him.

“It’s a far cry from when they used to get changed down in my back room, in a room behind the bar.”

She’d wash the kit, dry the kit, make the tea and whatever else needed done while her sons Declan, Frank, Liam and Kevin all turned out for the club.

She even ran the team for a while in the 1980s and when Rathmullan had to withdraw from the Donegal League in 1985 when they failed to field in four games, then League Secretary Hugh Strain said: ‘It is a terrible pity that this should happen. A good outlet for healthy outdoor life has been stopped. It is also a pity that Mrs McAteer should have been left in a position where she had to organise the club virtually single-handedly.’

She aided Paddy Sheridan looking after a team that reached the Area Final of the FAI Junior Cup in 1981 and was a one-woman committee for years. She was Honorary President in the 1990s when Rathmullan rejoined the Donegal League, but combined that with her duties on the League Executive.

She was coaxed by Fr Michael Sweeney into becoming Treasurer of the Donegal League.

She says: “I was appointed as the Rathmullan delegate to the Donegal League and Fr Sweeney came up to me at an AGM and said: ‘Mary, I want you to be my treasurer in the Donegal League’. I told him that I wasn’t going to do that, but he just said back: ‘Oh yes, Mary, you are going to do it and I’m going to propose you for it right now. I didn’t like refuse him then! I was treasurer with Denis Martin, God Rest Him, as the assistant, for years.”

She was given a lifetime contribution by Rathmullan in 2007, having stepped down from her post in the Donegal League in the early noughties: “I had a cancer operation back then – and I survived that. I didn’t go back very much after that.”