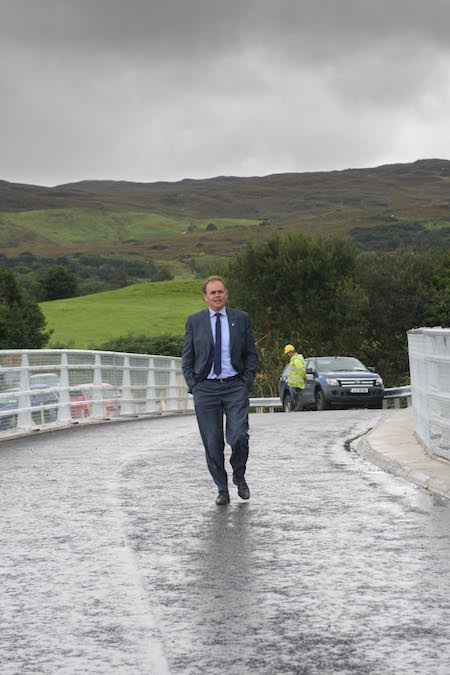 McHugh described Mac Lochlainn’s intervention in the race for the Fine Gael leadership as “ill-judged and riddled with fiction.”

And he said the Sinn Féin man would be “better suited ending the stalemate in the North” so the A5 can be put back on track.

The Donegal Deputy said that Mac Lochlainn had also “conveniently forgotten Minister Varadkar’s role in keeping the Malin Head Coastguard station open and his role in the €66M cancer care centre at Altnagelvin”.

Minister of State McHugh said: “The former Deputy appeared to blame Fine Gael and Minister Varadkar for almost everything. His statement was more suited to Monty Python than real life.

“The real truth is that Sinn Féin’s refusal to take part in power-sharing in Northern Ireland is the last remaining obstacle to progress on the A5.

“In November 2011, after entering Government it was Minister Varadkar who confirmed in the Dail that almost €20 million had been spent on the A5. This was against the backdrop of a very serious financial crisis in the country at the time.

“When Fine Gael entered Government we also discovered that the €400M pledged by Fianna Fail as part of the St Andrew’s Agreement in 2007 hadn’t been even accounted for – there was no money behind the pledge as it wasn’t in Fianna Fail’s budgetary calculations at all.”

McHugh said the Stormont House Agreement and Implementation Plan – A Fresh Start (November 2014) reaffirmed the Government’s commitment to provide funding of £50 million for the A5 project and committed an extra £25 million to ensure that Phase 1 of the project (Newbuildings to north of Strabane) can commence as soon as the necessary planning issues have been resolved by the Northern Ireland authorities.

“Senior officials from north and south continue to liaise over the project and it is hoped that all NI planning procedures will soon be completed, allowing decisions on project construction to be made,” said McHugh.

“Minister Varadkar committed Stg£50 Million in 2015 and 2016 but everyone knows there have been planning difficulties north of the Border and completely outside the control of this State. The Public Inquiry hearings closed in December 2016 and the Inspectors report is expected soon.”

Commencement of construction of Phase 1a (New Buildings to north of Strabane) is still on programme for November this year and McHugh said that “Senator Mac Lochlainn would be better getting his colleagues north of the Border to make sure this happens on time. We’ve given them the money towards it”.

On the Greencastle/Magilligan ferry issue, Minister McHugh said the cross-Border link is seeking a subsidy of €17,000 per week from the Government when there is no policy in the Department of Transport to fund ferries.

“I am the only Donegal TD to have put the ferry funding on the agenda of the North-South Ministerial Council. I did that when I was Minister for Inland Fisheries. It has never been raised by a single Sinn Fein minister in Northern Ireland,” said McHugh

“On further strengthening links across the Border, my Department has allocated €2.5M into a cross-Border fund which I believe could be used towards helping to keep a ferry crossing. Unfortunately, Senator Mac Lochlainn’s Sinn Féin colleagues failed to put their agreed €2.5M into the same fund before collapsing Stormont. So none of the money can be spent until they do.

“The former Deputy should be ringing his friends in Belfast and telling them to come up with funding for the Magilligan to Greencastle crossing – they can start by getting back into the northern administration and getting on with it instead of issuing statements without checking his facts first.”

McHugh said: “During the course of the leadership contest and repeated again on RTE Prime Time on Tuesday Minister Varadkar stated clearly that he wishes to increase infrastructure spending particularly in the North West and he also stated that includes connecting Donegal to the country’s motorway network via the A5.”

The Donegal TD said: “It was Leo Varadkar as Health Minister who secured an extra billion euro for our health services at a time when the Government was trying to fix the financial abyss left behind by Fianna Fail.

“There are problems in our health services. An extra €26M a year is going into Letterkenny University Hospital now than when we came into Government. I accept more needs to be done in terms of structures and funding.

“But this Government is spending more than €50M retaining and upgrading our Donegal community hospitals. Design work is about to begin on a €22M community hospital facility on the site of the LUH campus. One person on a trolley is one too many and this new facility will help alleviate some of those problems.

“But at least we are actually working to do something about it rather than whinging and moaning from the sidelines. There are a lot of people talking about Donegal and those same people should start working for Donegal.”